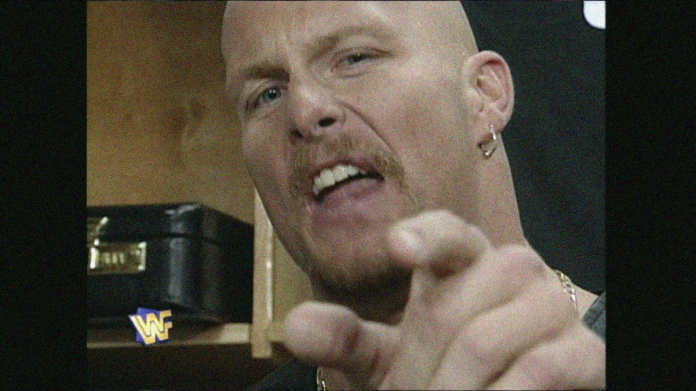 Welcome everyone, to a Retro Rambles review of an old-school WWF event! This week, we’re covering episode #201 of Raw is War from March 17 1997, which you can find on the WWE Network here.

Check out last week’s review, which covered the March 10 1997 episode of Raw, here.


The Legion of Doom vs. The Nation of Domination

The March 17 1997 episode of Raw is War kicked off with in-ring action featuring The Legion of Doom taking on Savio Vega and Crush, representing The Nation of Domination. Faarooq and Ahmed Johnson, the focal points of this feud, were banned from ringside for the matchup.

LoD got the hot start, beating the holy hell out of Crush and Savio for the first few moments of the bout. The crowd was still very much into LoD at the time, but Hawk and Animal were definitely on a downward slope in regards to relevancy.

During the match, Ahmed Johnson, who was sporting a sweet WWF jacket, was shown watching backstage on a monitor. They eventually cut to Ahmed again – just in time to see him in the middle of being attacked by Faarooq with a nightstick.

Faarooq didn’t stop there; he made his way to the ring and attacked LoD with the nightstick as well, causing a disqualification. But of course, Ahmed, armed with a 2×4, came to save the day.

The segment ended with the good guys standing tall over The Nation, who decided to live to fight another day. In just six days, these squads will face off in a Chicago Street Fight at WrestleMania 13.

Winner: The Legion of Doom (via DQ)

The most notable thing to occur during this segment was that Chyna finally got the name Chyna. Prior to this show, she was simply referred to as “that woman” or “that Amazon-like woman,” which was cool, but not as cool as Chyna.

As far as the match is concerned, it was a fun little bout that saw Flash Funk do a lot of really cool stuff that would still get a reaction today. In fact, Flash Funk (2 Cold Scorpio) is someone that we have no doubt Triple H would go out of his way to sign to NXT, were he wrestling today.

At one point, Funk hit a beautiful leg drop from the top rope, but Chyna broke up the pinfall attempt, preventing Funk from getting the win. Chyna also caused the distraction that set up HHH’s Pedigree, which eventually won him the match. It hasn’t been very long, but these two (Chyna and HHH) are already fantastic together.

During the match, the commentators addressed a few rumors that were going around the locker room, which included:

Up next was WWF’s terrible response to WCW’s legendary cruiserweight division: impersonator minis! Mini Goldust, teaming with Mascarita Sagrada Jr., defeated Mini Mankind and Mini Vader in a short-but-fun bout with Sagrada Jr. diving off of the stage area and onto Mini Vader post-match.

There’s something more to WWF responding the WCW cruiserweight wrestlers with a “mini division,” but that’s a story for another time…

Gorilla Monsoon Clears Up the Rumors

An agitated Gorilla Monsoon announced that tonight’s cage match for the WWF Championship was still on, still for the title, and nothing would change that.

Vince McMahon asked Monsoon why Bret Hart kept getting so many chances at the title, which led to Monsoon aggressively telling McMahon to mind his gosh-darn business, only in fewer words.

In the ring, Kevin Kelly interviewed Bret Hart regarding a multitude of topics. Firstly, Bret said that he was excited about capturing the WWF Championship later tonight, which would make Sunday’s showdown at WrestleMania 13 with Stone Cold Steve Austin a submission match for the title.

He also told The Undertaker to not worry about his ‘Mania opponent, Sycho Sid, losing the title tonight, because he would be more than willing to give ‘Taker a shot at the gold anytime.

Much like last week, Bret continued to bring up the fact that he had been screwed out of opportunities in the past, which is really eerie to watch with hindsight. Bret also said that he was going to beat Stone Cold so bad that he wouldn’t even be able to say “I quit,” which pretty much confirms that he’s probably a time traveler.

He closed out the interview by reciting his famous “best there is” catchphrase, which is still money to this day.


The Sultan vs. Mike Bell

The Sultan defeated Mike Bell, who some of you may remember from this, in a squash match. Rocky Maivia was on commentary, and to be frank, he wasn’t very good. Rocky came across as having no charisma or personality, which we now know isn’t the least bit true. I’m not sure what his issue was here, but whatever it was, he obviously corrected it quickly.

Rocky will be defending his Intercontinental Championship on Sunday at ‘Mania against The Sultan, which is why he was out there in the first place. After the match, Rocky and The Sultan faced off outside of the ring, but Tony Atlas broke it up before anyone got physical.

The last time we saw Shawn Michaels, he was severely injured, had lost his smile, and his in-ring career appeared to be over. Here were are one month later, and Michaels is not only back, but back in the WWF Championship picture.

We may have been a bit annoyed by this development, but Vince McMahon looked as those he was going to cry tears of joy or break out in song at any moment, which only made things even more… ew. Shawn literally laughed off his very real drama outside of the ring, as if somehow making jokes about how bad of a human being he had become was charming.

He did manage to woo quite a few ladies (as well as Vince) in the audience, which is something, I guess. Shawn said he was going to see Dr. Andrews next week, and as long as things went well, he would be back in the ring soon. He also brought with him the news that he would be at ringside for the title match at WrestleMania on Sunday, which is hilarious since he was supposed to be in the title match prior to his career-ending injury.

Thank goodness HBK righted the ship and came back better than ever to close out his career because he’s far too great to be remembered for stuff like this.


The British Bulldog vs. Vader

The British Bulldog, with Owen Hart in his corner, went one-on-one with Vader, who was accompanied by Mankind and Paul Bearer. Bulldog and Owen will be defending the tag titles Sunday at ‘Mania against Mankind and Vader, so a singles match between a partner from each team is textbook go-home show writing that we continue to see frequently today.

It didn’t take long for Mankind and Owen to get involved in the match, causing yet another disqualification. The two teams brawled for a few minutes post-match before Bulldog grabbed Paul Bearer’s urn and starting hitting folks with it.

Winner: The British Bulldog (via DQ)

Billy Gunn defeated Aaron Ferguson, a charming young lad who looked like he had gotten news about his grandmother’s passing right before stepping into the ring.

Ken Shamrock was on commentary, so of course, Billy had to do a ton of submission moves on A-A-Ron just to be a dick. Billy got the win with an armbar that was so bad it made The Rock’s sharpshooter and John Cena’s STF look like a million bucks.

After the match, he invited Ken into the ring, which ended with Ken whoopin’ that ass multiple times before Billy decided to call it a night and head back to the locker room.

Stone Cold Steve Austin threw some shade at Ken Shamrock, saying that Kenny only got the best of Badass Billy was because Billy was winded after his grueling match with Aaron Ferguson, which was absolutely hilarious.

Stone Cold said that Ken didn’t belong in the WWF because it was his home, not Ken’s and that one day, he’d stomp a mudhole in ‘im and walk that ‘sumbitch dry.

He said that by hook or by crook, Bret Hart would be leaving tonight with the WWF Championship, which is just great stuff. Stone Cold wants that title, so of course, he wants Bret to win it tonight in order to get a shot at it on Sunday.

Backstage, Sycho Sid said that he was ready to powerbomb Bret Hart and retain his WWF Championship later tonight. He also said that he’s no idiot, he knows what Stone Cold is going to try to do tonight, which means he’s going to have to lay him out with a powerbomb, too.

Bret Hart got some good heat early on in the match, but Sycho Sid kept coming back, stronger and stronger each time. There was a ton of solid back-and-forth action, Bret really did everything he could to make Sid look like a million bucks here.

This drew the attention of The Undertaker, who made his way out to even the score. Obviously ‘Taker wants the title to stay with Sid, so he’s going to do everything he can to make sure that happens.

This is excellent writing, and a really creative way to close out the go-home show for WrestleMania. All four men have something important at stake, so it makes sense that they would go out and kill one another this close to Sunday.

The match finished with Bret trying to escape via the door, only to be cut off by ‘Taker, which allowed for Sid to climb out the other side and get the win.

After the match, Bret cut one hell of a promo that is 100% uncensored on the Network. With the exception of the F-word, Bret dropped just about every expletive in the book during this promo.

He went off on Vince (even shoving him down at one point), as well as the entire locker room, in an epic rant that ended when Stone Cold appeared on the Titantron to call him out about being so dramatic.

Bret said that everyone knows he should be WWF Champion, and even called Stone Cold back out to the ring so he could tell him how he felt face-to-face, but he got Sycho Sid instead. Sid claimed that he didn’t know shit and called Bret a crybaby, which is one of our favorite wrestling memes of all time.

Eventually ‘Taker and Stone Cold come back out, and a brawl between all four men ensues. Shawn Michaels also got involved, except not really, because he just stood there and looked like an idiot the whole time. Outside of Shawn’s involvement, or lack thereof, this was an awesome segment and a great way to close out the Raw before WrestleMania.


What do you think about the March 17 1997 episode of Raw is War? Let us know on Twitter, @TheRumbleRamble.