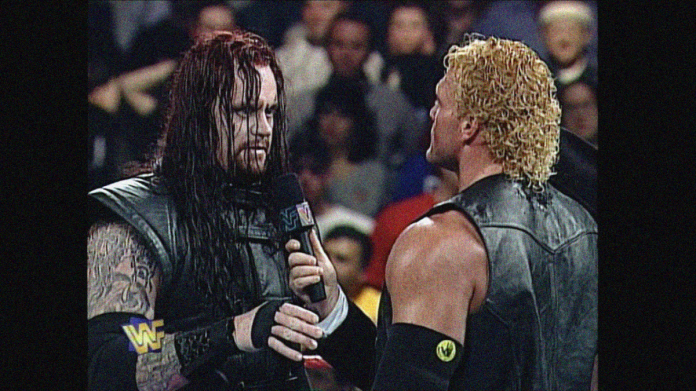 Welcome everyone, to a Retro Rambles review of an old-school WWF event! In this edition, we’re going to cover the 03/10/1997 edition of Raw, episode #200, which you can find on the WWE Network here.

We’re going to be breaking down the show segment-by-segment, giving our overall thoughts and opinions, as well as the match results, for your reading pleasure. Be sure to look for the “must-see TV” icon throughout the review, as we’ll be placing said icon atop every segment that we highly recommend.

Have some thoughts on this particular show? Send ’em our way on Twitter, @TheRumbleRamble. If you’d like to hear an audio review of this show, you can find one on our Patreon here.

The Debut of Raw is War

This particular episode was the debut of the “Raw is War” branding, including a new name for the show, a new theme song, new television graphics, improved pyro, and the first appearance of the legendary Titantron. WWF really spent a lot of money to improve the quality of Raw, making the presentation of the show something special for its time.

We’re also less than two weeks away from WrestleMania 13, meaning the Attitude Era is almost in full swing, which is why we decided to start with this particular episode of Raw for our Retro Rambles review series.

Sycho Sid and The Undertaker Join Forces… For Now.

Sycho Sid made his way to the ring with the WWF Championship around his waist to kick off the show. Jim Ross met him there for an interview, which isn’t really Sid’s strong suit but is somehow entertaining nonetheless.

Sid rambled loudly about nothing, but the gist of what he was trying to say was that he refused to team with The Undertaker later in the evening. Sid and Taker are set to face off for the WWF Championship at WrestleMania in 13 days.

The Undertaker made his way to the ring to respond, telling Sid that his logic didn’t make any sense (which is true, Sid never made any sense at any point in his career). Taker said that he would be sure nothing happened to Sid tonight because Sid being injured would mean no title opportunity for Taker at WrestleMania, something he was not willing to let happen.

Paul Bearer joined the party, accompanied by Mankind and Vader, Sid and Undertaker’s opponents for the evening. Paul accused Taker and Sid of being afraid of Mankind and Vader, which led to all four men exchanging blows. The segment closed with Sid and Taker facing off and apparently agreeing to join forces.

Rocky Maivia, the Intercontinental Champion, defeated Tony Roy in a non-title match. Vince McMahon butchered Tony Roy’s name on commentary so many times that we have no idea how it’s actually pronounced.

Bob Backlund, The Iron Sheik, and The Sultan (Rikishi) attempted to distract Rocky during the bout by throwing insults his way from atop the stage, but Rocky got the win via a crossbody from the top rope despite their presence.

After the match, Rocky laid out The Sultan, who attempted a sneak attack on the soon-to-be-great one, but did not succeed. Rocky and The Sultan will be facing off for the IC Title at WrestleMania 13.

These six men did some tremendous lucha things throughout this match, but the constant distractions that weren’t related to this segment kept it from being as great as it could have been.

WWE used this segment to promote other things on the show by way of giant graphics appearing on-screen while the action in the ring was taking place. Jerry Lawler made a ton of jokes about AAA and ECW stars being less talented than the WWF Superstars, which didn’t help things.

Chyna, who had yet to be named Chyna, was also escorted out of the crowd during this match. The commentary team talked about her for more than a few minutes, even throwing back video highlights of her previous appearances on WWF TV, completely disregarding the match taking place. At one point, Brian Pillman appeared on the screen and cut a promo hyping his return. Any and everything was discussed during this match, everything except the match itself.

Heavy Metal, Pentagon, and Pierroth got the win in what was truly a missed opportunity to counter WCW’s amazing cruiserweight division.

Ahmed Johnson, the most padded man in the history of pro wrestling, defeated Roy Raymond in a quick squash match via the Pearl River Plunge.

During the match, The Nation of Domination attempted to intimidate Ahmed by watching the bout from the stage but failed to have much of an effect on him at all.

The British Bulldog and Owen Hart (c) vs. The New Blackjacks

The two teams had a solid match that got a decent amount of time, especially for Raw in 1997.

The referee awarded the decision to The New Blackjacks via disqualification when The British Bulldog refused to leave the ring by the count of five. This is perhaps the only time we’ve ever seen someone DQ’d for not honoring the time limit, which was a cool and creative way to end the match.

Taz came out through the crowd and tried to get his hands on Jerry Lawler, but the two were separated before anything physical happened between them.

Sabu showed up and tried to dive onto both men via a diving senton to the floor, but they moved at the last moment, causing Sabu to crash and burn through a table at ringside.

The ECW invasion storyline from 1997 was so much fun, and this segment was the perfect example of how well done it truly was. Fans had no idea who was going to show up, or what was going to happen, they just knew that it was going to be wild and crazy. Unpredictability at its finest.

Miguel Perez defeated Leif Cassidy in a short, but fun matchup. Miguel may have been one of the hairiest men in the history of the world. He looked like a Monchichi in a wrestling singlet here.

Jim Ross Interviewed Ken Shamrock in the ring about his involvement at WrestleMania 13. It was announced that Shamrock would be the guest referee for the Bret Hart//Stone Cold match, a fitting role for him, as submission holds were Shamrock’s specialty.

Shamrock isn’t a great promo, but Stone Cold is, and he tells Shamrock to shove it via the Titantron. This was the first example of a promo war between two guys, one on the Tron, one in the ring, an approach that is still used in WWE today.

Shamrock challenged Stone Cold to come down to the ring, but Bret Hart came out instead. Bret complained about being screwed (foreshadowing) by everyone in the WWF, and told Shamrock that he wasn’t going to let him join that list.

Stone Cold came out and stood on the stage, flipping off both men before walking away. This was a weird way to end what was a fun segment that helped build excitement for the submission match at WrestleMania 13.

Billy Gunn defeated Aldo Montoya, who was just incredible in his role as jobber to the stars in the 90s, with a badass leg drop from the top rope.

The Honky Tonk Man was on commentary talking mad trash during the match, which is always hilarious. No one can get a laugh from us quite like Honky can.

Hunter Hearst Helmsley and Chyna (who had yet to be given a name), stood at the top of the ramp while Goldust defeated Tim McNeany, who looked about as threatening as your local pizza delivery boy. This is like the fourth segment that included someone’s WrestleMania opponent standing on the ramp during their match. The lack of creativity is appalling.

After the match, Chyna distracted Goldust, allowing Hunter to get the best of him from behind. Marlena tried to even the odds but her attempts didn’t faze Chyna whatsoever.

Jerry “The King” Lawler and Paul E. Heyman had a debate about ECW, specifically whether or not it should even exist, in the middle of the ring.

Each man got 90 seconds to speak their mind, with Jerry running down ECW, and Paul running down Jerry, both making things extremely personal with their remarks. This entire segment was a brilliant way to plug ECW’s pay-per-view event, Barely Legal, which, for the record, was one hell of a show.

All of the ECW originals ended up in the ring, which led to Jerry calling out his “friends” to help even the sides. No one came to Jerry’s aid, but that didn’t deter him. Both sides continued to argue while the segment ended. The “crash TV” style really created some awkward endings to segments back in the day, and tonight’s show had more than a few of those moments.

Mankind and Vader vs. Sycho Sid and The Undertaker

The action started without The Undertaker, who apparently had something better to do during the first few minutes of the match. Either that, or he was playing mind games with Sid… You pick which story you prefer.

Once Taker finally arrived, he whooped ass, clearing out the ring and saving Sid from a 2-on-1 beatdown. Unfortunately, Taker whooped too much ass, as he accidentally hit Sid, causing Sid to snap and attack Taker.

Mankind and Vader got the win after Sid powerbombed The Undertaker and left him lying in the middle of the ring. The show ended with Bret Hart hyping his match with Sycho Sid next week, which will take place inside of a solid steel cage, for the WWF Championship. We’ll see you then!