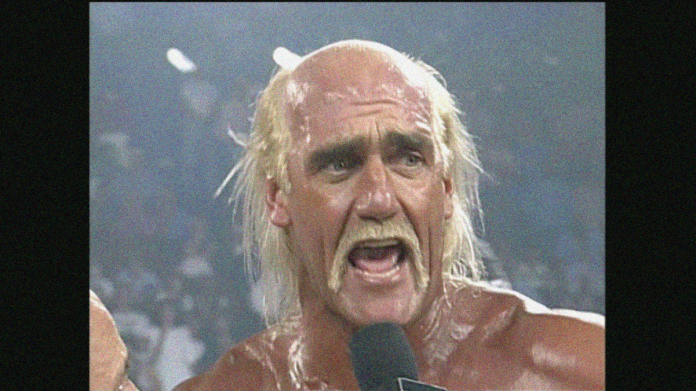 Welcome everyone, to a Retro Rambles review of an old-school WCW event! This week, we’re covering episode #2 of Monday Nitro from September 11 1995, which you can find on the WWE Network here.


This particular episode of Nitro took place at the Knight Center in Miami, Florida. Other notable events that aired from this building include Clash of the Champions II (1988) and WCW Nitro #20 (01/15/1996), which we’ll be reviewing in a few months.

Eric Bischoff, Steve “Mongo” McMichael, and Bobby “The Brain” Heenan were on the headsets again here. Bischoff set up to a brief video recap of last week’s show and also informed fans that Vader had gone AWOL (he’s been fired). So Hogan’s team for the WarGames match, which happens this Sunday at Fall Brawl, is down a man.

And although last week’s show was the first-ever episode of WCW Nitro, we didn’t have the classic Nitro set yet. Well, this week we do, and the show is slowly starting to feel (and look) like the Nitro I remember as a result.

Up first, we got the Nitro debuts for both Sabu and Alex Wright. The two didn’t have a ton of time to work with (around 4 minutes), but they did everything they could to make the most of it.

Sabu got the win, but post-match, he put Alex Wright through a table, so the ref reversed the decision. I actually really dug this, because it makes it feel like there are important rules in place to prevent post-match attacks like this from happening.

The fact that the rules aren’t enforced enough is the problem. But again, this did its job and made Sabu look like a psychopath who didn’t care about winning, just hurting his opponents.

Up next, we went to an in-ring interview with Ric Flair, conducted by the legendary “Mean” Gene Okerlund. Flair was upset with Arn Anderson after last weeks attack. He cut one of those Flair promos that is hard to really understand what the heck he’s even talking about (that’s pretty common for most WCW promos of this era), but I got what I needed to get from it.

Lex Luger shows up, for whatever reason, and Flair bigs him up. Luger then leaves, and Flair follows suit soon after. Kinda awkward stuff here, to say the least.

After a Fall Brawl ad, we went into our second match of the evening…

Probably the most notable thing about this match was, during Sting’s entrance, Bischoff gave away the results to Raw for the first time ever. Obviously, Raw was pretaped and airing on the other channel, so Bischoff decided to tell everyone what happened on the show so they wouldn’t feel the need to flip over. This is going to be a trend that doesn’t go away, and eventually hurts WCW pretty bad one night in January of 1999.

As far as the match is concerned, it’s nothing to write home about. In fact, if you’re looking for solid in-ring action, this isn’t the show for you.

Sting got the win here in about 4 minutes after a Stinger Splash/flying cross body sequence. Sting is a member of Hogan’s WarGames team, and we’ll see more of him later in the show.


Before we went into the next segment, we got a brief promo for WCW Saturday night. The show is going to feature the debut of Disco Inferno, which is kind of worth mentioning, I think.

Scott Norton beat the everloving shit out of Randy Savage here, and it’s pretty awesome to watch, even today. At one point, Norton planted Savage with a brutal-looking powerbomb, which probably should have been the finish, because it was fantastic.

Eventually, the Dungeon of Doom showed up and tried to attack Savage, who of course is the third man on Hogan’s WarGames team. The Shark eventually fell on Norton’s legs, allowing for Savage to hit the elbow and get the win.

Norton was obviously upset, but the number’s advantage was just too much for him to do anything about it, so he just took his L and left.

This fourth segment was super short, for whatever reason. I’m not sure if they went long during an earlier segment and had to cut something here as a result, or if this was only supposed to go a few minutes, but it was a bit odd, to say the least.

We got a brief shot of Luger making his way to the ring for his WCW World Heavyweight Championship match, and then a Fall Brawl ad before we went to our next-to-last commercial break…


Enjoying our review of the September 11 1995 episode of Monday Nitro?


Hulk Hogan’s entrance music hit the moment we returned from break, which much like last week, is pretty solid formatting. Jimmy Hart was by his side and the title was around his waist yet again.

Luger no-sold a suplex early on in the match, which popped me. Luger, like Big Bubba Rogers last week, got a decent amount of offense in here. He even got the Torture Rack locked in at one point, but it didn’t matter because Hogan is Hogan.

Eventually, Hogan hulked up and hit the point/big boot/leg drop combo, which was about to get him the win… until the Dungeon of Doom showed up YET AGAIN.

Savage and Sting quickly showed up too and made the save, leaving the three WarGames partners (Hogan, Savage, and Sting) in the ring with Luger, who was just making his way back up to his feet.

We then went to the last commercial break of the evening with the Nitro 4 (I’m dubbing them that until Hall and Nash show up) in the ring, arguing amongst themselves.


In the ring, Mean Gene was trying to figure out what was going on between Hogan, Luger, Savage, and Sting. Everyone was yelling at and over one another, but the gist of the story being told here was actually pretty solid.

Savage was convinced that Luger (and possibly Sting) are in cahoots with the Dungeon of Doom, because they (the DoD) didn’t attack Luger or Sting, but did attack Savage and Hogan. Again, that’s good stuff, even if I don’t like the DoD.

Of course, Sting claimed his innocence and even pitched the idea of Sting being the 4th man for their WarGames team. Obviously, Savage hated the idea and shot it down quickly, so that meant Hogan had to decide if Luger was in or out.

After some consideration and a lot more talking over one another, Hogan decided to agree with Sting and voted for Luger to join the squad. Luger agreed too, under one condition… he wants to finish this title match one day down the line.

Hogan agreed to that, and we went off the air with Bischoff hyping Fall Brawl (and Randy Savage yelling about how Luger can’t be trusted). Not as fun of an episode as last week’s show, but we did set the stage for WarGames and Fall Brawl, which is important.


Have some thoughts on the September 11 1995 episode of Monday Nitro? Send ’em our way on Twitter, @TheRumbleRamble.