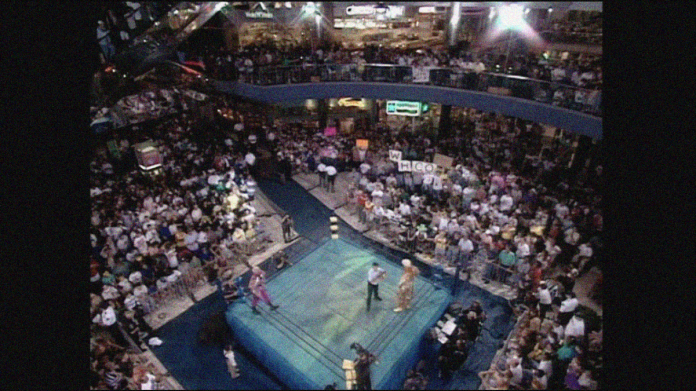 Welcome everyone, to a Retro Rambles review of an old-school WCW event! This week, we’re covering episode #1 of Monday Nitro from September 4 1995, which you can find on the WWE Network here.

If you’d like to hear an audio review of this show, you can find one on our Patreon here.


The Start of Something Special


We kicked off the first-ever episode of WCW Monday Nitro with that classic Nitro opening video package. This opening package is, in my opinion, one of the greatest intros for a weekly wrestling television show ever. Seriously, I still get all tingly inside every single time I see it.

The September 4 1995 episode of Monday Nitro took place at the Mall of America in Bloomington, Minnesota. I couldn’t find any information regarding another show ever taking place at this venue, so if you know of one, send that info our way on Twitter.

WCW was always good for a few shows a year that took place at a wacky venue and had a unique set up as a result. It seems only fitting that the first-ever episode of Nitro was one of those shows.

Eric Bischoff, Steve “Mongo” McMichael, and Bobby “The Brain” Heenan were on the headsets here. I’m not a huge fan of three-man booths, and to refrain from being too mean to Mongo, I’ll just say that things would have been better off with just Bischoff and Heenan on the call.

After that brief introduction, we quickly got to the in-ring action, which is something I loved about WCW Nitro back in the day. You could almost always count on a pretty solid match within the first few minutes of that start of the show.

Jushin ”Thunder” Liger and Brian Pillman faced off in singles competition in the first-ever Nitro match, which is a neat tidbit that could win you a game of Wrestling Jeopardy one day.

The first thing that jumped out at me here was just how… dirty the ring the looked. We also don’t have the cool Nitro set or the black and gray ring yet, either (that’s all coming next week).

Again, Nitro really had something special when they started to kick shows off with the cruiserweights. And while that’s not exactly what’s happening here, opening up the show with this kind of a match is the same idea. So it’s kinda neat to see Bischoff and his team already figuring out the things that are going play a huge part in their success down the line.

Pillman got the win with a rollup after a solid back-and-forth match. It’s not anywhere near as good as some of the other stuff these two did together outside of WCW, but it’s far from bad and a good way to kick off the night (and the era).


Before we went to a commercial break, Sting cut a promo hyping his upcoming match with Ric Flair. The fact that these two guys wrestled one another on both the first and last episodes of Nitro, and a ton before that, adds to the argument that Flair vs. Sting is WCW’s biggest (and best) matchup ever.

Up next, we went to clip of Hulk Hogan and Eric Bischoff from earlier in the day. Hogan, at his newly opened Pastamania restaurant inside the Mall of America, cut a promo hyping up tonight’s WCW World Heavyweight Title match between himself and Big Bubba Rogers.

Because Hogan has said his prayers, ate his vitamins (and his pasta), he’s guaranteed a victory for tonight. We’re getting classic Hogan here less than a year before the red and yellow is traded in for the black and white, which is kind of fun.

For those of you who are wondering, Pastamania shut down only a few months later, which is not that surprising. Closing down shop is kind of the theme of this show, I suppose.

After that brief Pastamania-fueled visit by Bischoff and Hogan, the greatest song in the history of music began to play, signaling the arrival of the “Nature Boy” Ric Flair.

Flair’s got a shot at Sting and his United States Championship here. Before Sting’s entrance had even finished, we cut to a shot of Lex Luger standing on the entranceway.

Once again, Bischoff and his team have already figured out something that is going to be a huge part in their success down the line. They’re playing up the idea that this isn’t planned, and that Luger, who is obviously a big WWF star, isn’t supposed to be here.

This isn’t quite the invasion angle that we’re going to see next year, but it’s still a pretty neat idea, even if Bischoff oversells it a bit.

Speaking of the WWF, there are tons of jabs from the commentary team throw in the direction of New York on this broadcast. Seriously, this thing is just over 45 minutes long and there are probably a half dozen anti-WWF remarks scattered throughout, which is just too much.

As far at the match is concerned, it’s pretty the best of Flair vs. Sting, spot-wise at least. Sting press slammed Flair about a dozen times, and of course, Flair sold it like he was being beaten by The Hulk. Sure, it’s nothing close to what they’d done in the past together quality-wise, but I actually really enjoyed seeing them just play all of their hits and have a little fun in the process.

These two get a lot of time, in fact, there’s even a commercial break during the match…

We returned from the break to see Arn Anderson had joined the ringside area, but his intentions were unknown. This distracted Sting, who again, was on a roll at this point and probably should have just ignored him.

That distraction led to Flair getting the Figure Four locked on tight, but Sting just refused to tap. In return, Flair grabbed the ropes and refused to let go, of Sting or the hold, so the ref DQ’d him. I guess Flair didn’t really want that US Title too bad, because losing via DQ certainly wasn’t going to win it for him.


Anderson jumped in the ring as soon as the bell rang and he and Flair went at it, to the surprise of the commentators. Of course, Flair ran off before things got too bad because he’s the best cowardly heel of all time and that’s what he should do.

Scott Norton then showed up and got all in Bischoff’s face at ringside. He was upset that he wasn’t booked on the show, which is a pretty legit reason to be mad, to be fair. We’re kind of acknowledging that Bischoff is more than just a commentator here too, which adds another layer of realism that I really enjoy.

For whatever reason, “Macho Man” Randy Savage came to Bischoff’s aid and challenged Norton to a match right then and there. Bischoff threatened to suspend or fire Norton if he got in the ring with Savage, who was already in the ring taunting Norton from the top rope.

Bischoff told the truck to go to a Sabu vignette to buy some time so he could get things back under control, which is really great writing and formatting, in my opinion.

Again, I really dug this. It felt like an “anything can happen on live TV” moment, and those moments are some of the most memorable in the history of the business. Bischoff trying to grab control of things so the whole show isn’t ruined by Norton and Savage’s hot-headedness is the kind of simple logic that I absolutely love as a fan.

The Sabu vignette that Bischoff told the truck to run was really awesome, too. I have no clue why Sabu didn’t work out in WCW, but I must admit, seeing a video package of him doing crazy stuff in 1995 is pretty wild. This is again a sign that Bischoff is trying to give a mainstream audience something they’d never seen before up to this point, which is ultimately what made this show so beloved.

We come back from break and the first thing we see is “Mean” Gene Okerlund in the ring. He announced that Mike Hill, from Cullman, Alabama, had just won a Harley Davidson motorcycle. I really hope Mike didn’t kill himself on that death machine, motorcycles should only be ridden to the ring, and nowhere else.

We then got a promo from Mr. Wallstreet, AKA, WWF’s IRS, who will be debuting next week. The video here glitched over a live feed shot from the arena, which made me laugh for some reason. Even though a TV company owned WCW, tech issues will continue to haunt them as they move forward.

Before we go to another break, we saw the entrance for Big Bubba Rogers, who would face Hulk Hogan for the WCW World Heavyweight Title… AFTER THE BREAK!


Enjoying our review of the September 4 1995 episode of Monday Nitro?

Hulk Hogan’s entrance music hit the moment we returned from break, which again, is pretty solid formatting. Jimmy Hart was by his side and the title was around his pasta-filled waist.

Big Bubba came out of the gates guns blazing here, but for some reason decided to go after Hart halfway into the match, which gave Hogan an opening.

After another brief run with Big Bubba on top, Hogan finally hulked up and hit the point/big boot/leg drop combo to get the win.


Post-match, Kamala and the Dungeon of Doom ran out and attacked Hogan from behind. Hogan fought them off, of course, but with the help of Lex Luger, who apparently decided to stick around and watch the rest of the show.

Even though Luger helped him out, Hogan told Luger that he didn’t belong there and that he needed to go back to where he came from, which is an awkward sentence to type in 2019.

Sting and Randy Savage were also in the ring at this point, trying to calm everyone down as we headed into the final commercial break of the evening…


Hogan vs. Luger for the Title is Set


The September 4 1995 episode of Monday Nitro was winding down at this point. We came back from the break to see Mean Gene in the ring once again, this time trying to control the chaos that was unfolding between Hogan and Luger.

Hogan, on the mic, asked Luger why he was there, which was a fair question. Luger said he was there for the WCW Championship belt, and that he was tired of playing with kids… he wanted to play with the big boys.

Hogan respected that answer and decided to give him a title shot for next’s week show in Miami. The two shook hands on it, and then almost came to blows again, but the people in the ring pulled them apart.

As we went off the air, Bischoff promoted the Nitro debuts of Sabu and Mr. Wallstreet, as well as the Hogan/Luger title match, for next week’s show.


Have some thoughts on the September 4 1995 episode of Monday Nitro? Send ’em our way on Twitter, @TheRumbleRamble.