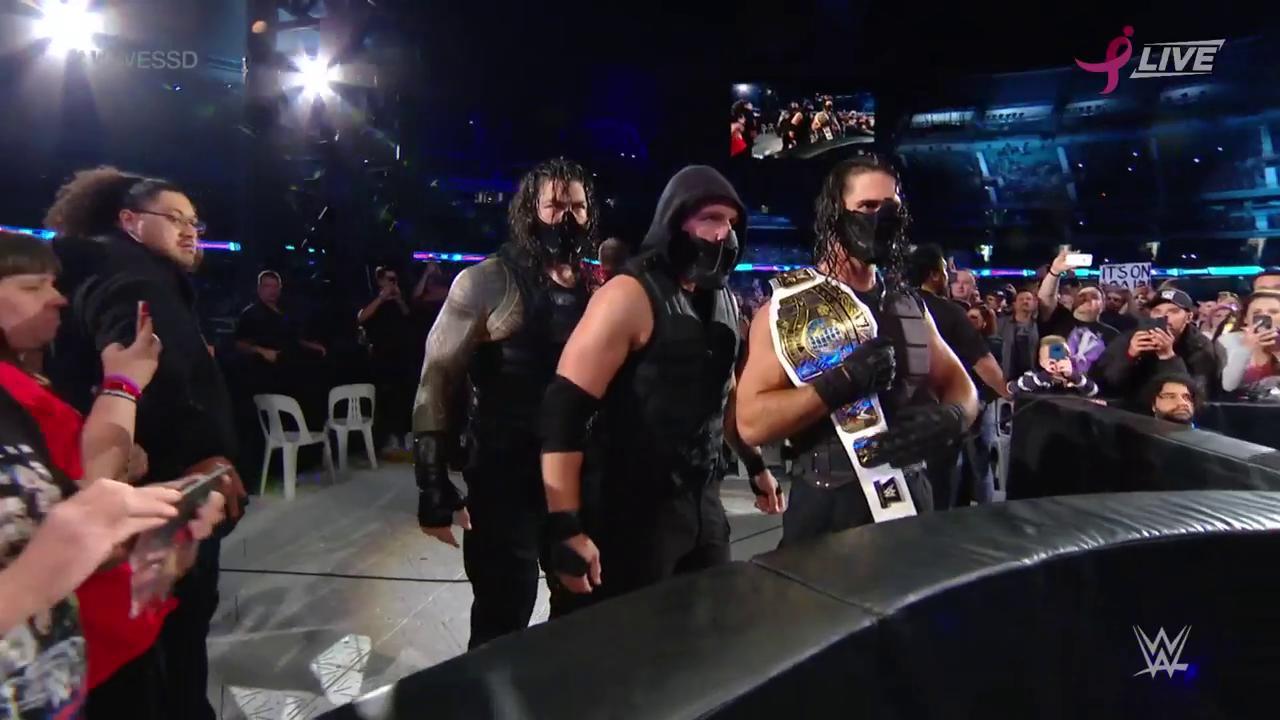 The New Day defended their tag team championship titles against The Bar in a fun opener filled with exciting moments. Kofi Kingston and Xavier Woods collaborated on a sweet backstabber//double stomp combination to get the win for The New Day.

It could be over in a SNAP once @BeckyLynchWWE gets a hold of that arm! #WWESSD pic.twitter.com/GW6MyH1Lpl

Becky Lynch retained her SmackDown Live Women’s Championship after losing to Charlotte Flair via disqualification. The two had a solid match with one another before Becky felt the heat and decided that a DQ loss was the best way to ensure she left Australia with the title.

Post-match, Becky roughed Charlotte up some more, leaving her lying in the ring to close out the segment.

John Cena and Bobby Lashley vs. Elias and Kevin Owens

The IIconics vs. Asuka and Naomi

The IIconics defeated Asuka and Naomi in front of their home country crowd. This match was probably the weakest one on the show, but seeing Billie Kay and Peyton Royce get a W in Australia was a neat moment.

The BATTLE rages on…

AJ Styles and Samoa Joe had our personal match of the night. The two started the bout on the ramp and really did a wonderful job of selling the idea that this fight was personal and not a standard wrestling match. Styles got the win by submission with the Calf Crusher, after dishing out a ton of punishment to Joe’s knee throughout the match.

The Riott Squad vs. The Bella Twins and Ronda Rousey

The Bella Twins and Ronda Rousey defeated The Riott Squad in six-person tag action. Rousey locked the armbar on both Sarah Logan and Liv Morgan, forcing both to tap out. We’re glad to see Liv Morgan healthy and back in action, she’s got a bright future in the WWE ahead of her.

If you’ve been watching 205 Live, you know that the cruiserweights are can’t-miss TV right now. Buddy Murphy has been one of our favorites since joining the division earlier this year, and expectations were high for this match, to say the least.

Murphy, along with Cedric Alexander, lived up to those expectations. Both men pulled out all the stops; Murphy even kicked out of the Lumbar Check at one point. The Melbourne crowd was behind their hometown hero all the way, and they went home happy as Murphy defeated Alexander via Murphy’s Law to capture the title.

The Shield vs. Braun Strowman, Drew McIntyre and Dolph Ziggler

The Shield defeated Bruan Strowman, Drew McIntyre and Dolph Ziggler in an awesome six-man tag team match. This brought us right back to 2013/14, when The Shield were having incredible six-man tag matches every week.

There were tons of awesome spots, including one where Roman Reigns speared Strowman through the barricade at ringside, saving Dean Ambrose from a shoulder tackle in the process. Speaking of Ambrose, he nailed Ziggler with the Dirty Deeds to get the win for The Shield.

Daniel Bryan vs. The Miz

Daniel Bryan defeated The Miz in just a few short minutes. Bryan snuck away with the victory after landing a small package on Miz to score the pinfall. Bryan is now the new number one contender for AJ Styles’ WWE Championship.

If you blinked, you missed this one; it was over that fast.

Right before the bell rang, it was announced that the match would be no disqualification, which drew a smirk from Triple H and a dirty look from The Undertaker. The two brawled around the ringside area, with both Shawn Michaels and Kane getting involved at points, for the first half of the match.

Once the action came back to the ring, the two exchanged finishing maneuvers on one another for near-falls. The live crowd absolutely loved this match, or perhaps they loved characters that were involved in it. They were loud from bell-to-bell either way.

Thanks to HBK, The Game introduced a sledgehammer to the match. After a sledgehammer shot to the dome, a Sweet Chin Music from Michaels, and a Pedigree, Triple H pinned The Undertaker for the first time ever to win the match.

Post-match, all four men embraced one another while an impressive pyro display lit up the sky. It looked as though that was how the show was going to end, but the Brothers of Destruction laid out Michaels and Triple H to close out the event.

What letter grade would you give #WWESSD?