The August 21 2019 edition of WWE NXT UK, from the Plymouth Pavillions in Plymouth, Devon, England, just wrapped up. We’ve got the match results, as well as our overall thoughts on the show, for you to check out below. Let us know what you thought about episode #57 of NXT UK by tweeting us, @TheRumbleRamble.

This match was surprisingly competitive… The Hunt put up a much bigger fight than I expected them to. I guess Aichner and Barthel aren’t scheduled for TakeOver: Cardiff at the moment, but still, I thought they’d run away with this one.

A segment or two later, Aichner and Barthel were taken out backstage by a mystery man… more on this later!

This was a showcase squash match designed to give Kay Lee Ray some momentum heading into TakeOver: Cardiff. In case you missed it, she’s facing Toni Storm for the NXT UK Women’s Championship in 10 days.

Post-match, Lee Ray talked some smack about Storm, drawing her out to the ring rather quickly. She continued running down Storm, saying that Storm was to blame for her own family problems… ouch.

Visibly upset, Storm slapped Ray hard in the face, but Ray decided it would be best to wait until Cardiff and walked away without retaliating.

The stipulation here was that if Mark Andrews won, he and Flash Morgan Webster would be added to the tag title match at TakeOver: Cardiff between the champions (Grizzled Young Veterans) and Gallus.

Drake didn’t really want to fight Andrews, but Andrews brought the fight to him and forced his hand. Andrews landed a standing moonsault early on in the match, but Drake kicked out of the pin attempt and then grabbed a hold for a bit.

After Drake weighed on Andrews and used his size and power advantage to control things, Andrews finally fired up and hit just about every move in his offensive repertoire.

Zack Gibson noticed things were going bad at this point and tried to get involved, and it almost worked, but Andrews managed to stay alive.

After a Poison Rana outta nowhere, Gallus showed up and tried to help Drake, too. Obviously, they didn’t want a 3-way at Cardiff, either. Unfortunately for Gallus, their plan backfired, and Andrews got the win via Stundog Millionaire.

He and Webster are headed to TakeOver: Cardiff.

Turns out that the mystery man that attacked Aichner and Barthel earlier was a returning Trent Seven! He showed up through the crowd and got in the ring, drawing out UK Champion WALTER in the process.

WALTER came down to the ring and Alexander Wolfe tried to follow him but was taken out with a chair by Tyler Bate. Bate then tried to attack WALTER with the chair, and got some licks in, before WALTER fought back.

After a brief brawl, Bate eventually hit the Tyler Driver 97 on WALTER, while Seven kept Wolfe busy, allowing him to pose over WALTER with the title to close out the show.

The crowd LOVED this segment, as did I, and I couldn’t be more excited for Bate/WALTER at TakeOver: Cardiff. 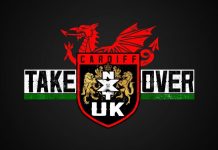