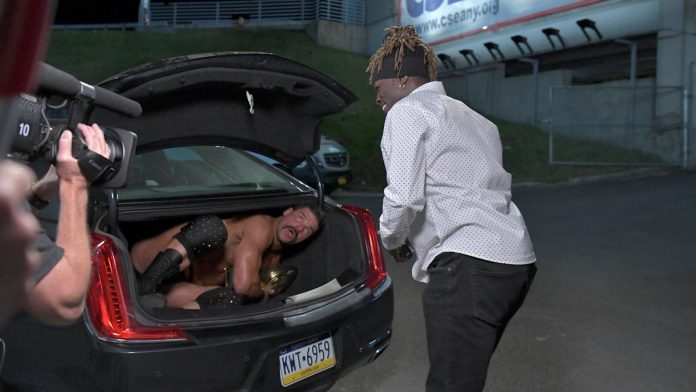 The year is 1998, Vince McMahon is handing Mankind a shattered winged eagle championship belt held together by duct tape, mockingly praising him for his prowess as the “hardcore legend.”

This tattered title was the Hardcore Championship, and over the next four years, would go on to change hands a total of 240 times. It quickly became a staple of what is now known as the Attitude Era, a beloved 4 and a half years of WWE (then WWF) that, to this day, evokes a great deal of nostalgia among those who were around to experience it firsthand.

The Hardcore Championship fit perfectly with the Attitude Era, lawlessness and a “wild west” feel being the hallmark of both.

The duct taped title died shortly after the Attitude Era in mid-2002, and though it had one or two brief appearances after that date, it was never fully reinstated.

That is until last night’s episode of Raw. On Sunday night, WWE announced on social media that Mick Foley would be making an appearance on the flagship show to unveil a brand new championship.

This proclamation sent fans into a frenzy of speculation regarding what the title would be and what sort of stipulations would surround it. As Mick Foley’s reputation as the hardcore legend is now very much a reality and not simply a joke between Vince McMahon and his cronies, many of us assumed, and hoped, that it would a reinstatement of the cherished Hardcore Championship.

What we got was the “24/7 Championship,” but when you strip away the name and the, in our opinion, altogether too shiny, green and gold of the belt itself, you’re left with a reincarnation of the Hardcore Championship, with all the same rules, or lack thereof, that made the original what it was.

This title can be won by anyone on any brand, and possibly even of any gender, and will be under a constant Falls Count Anywhere stipulation. Meaning, as long as the Superstar has a referee by their side to count the pinfall, he (or she) can win the championship anywhere; in the locker room, at a gas station, on a plane, wherever the champion and their pursuer may be at the time.

As of this morning, there have already been three 24/7 Champions: Titus O’Neil, Robert Roode, and R-Truth. But Truth took the title with him on his way to SmackDown Live, meaning we’re more than likely going to see it change hands at least once more tonight.

Along with the 24/7 Championship, Mick Foley declared that things were getting a little too glitzy on the flagship show. They had gotten too far away from what the show was created to be, Raw.

Many of the lights went out, the bright red and white emblems all around the arena changed to red and black, and we were promised a darker, grimier 3rd hour of Raw from now on.

The new championship and shift in the presentation of the third hour of Raw represent a reintroduction of two of the most loved components of what many consider WWE’s true golden age and an upholding of the promise that was made late last year to give fans a fresh and exciting product.

Not to mention, one thing the Attitude Era didn’t have was social media and a large portion of its fanbase in a constant search for updates on their platforms. The 24/7 Championship has the potential to be even more fun than its Hardcore predecessor, as Superstars have already taken to their social media platforms to promote the title, giving us a constant stream of entertainment in their pursuit of it.


What do you think of the 24/7 Championship? Let us know on Twitter, @TheRumbleRamble.