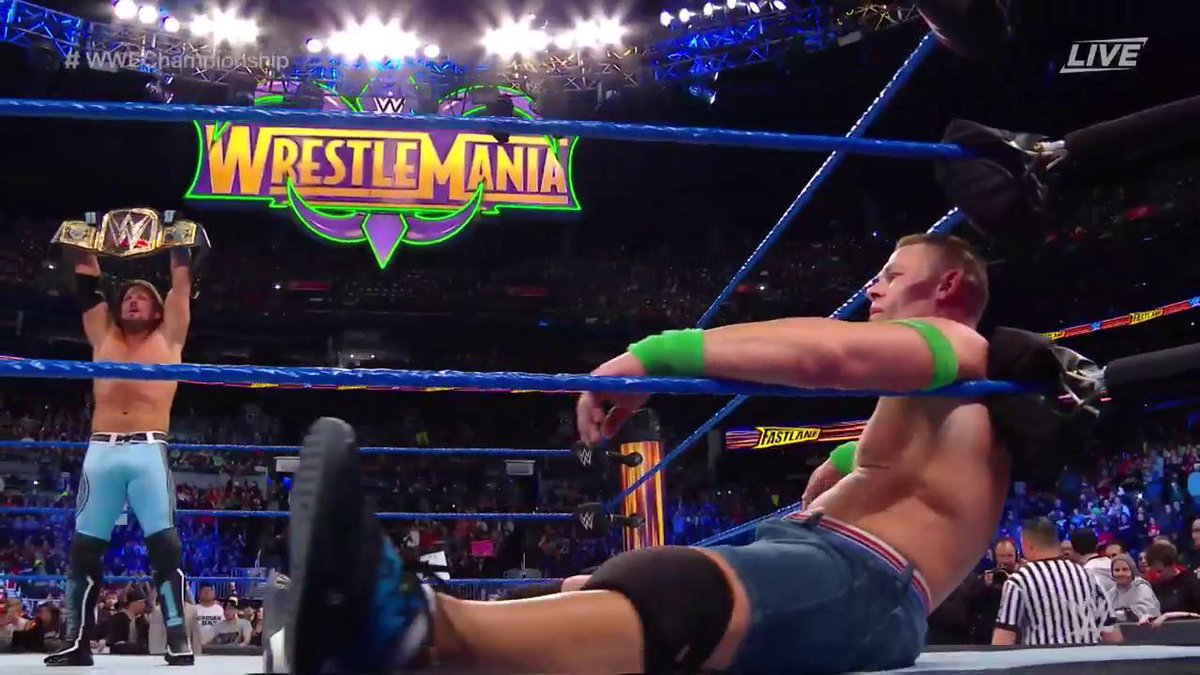 WWE Fastlane 2018 went down tonight, March 11th, live on the WWE Network. We’ve got the match results, as well as our overall thoughts, for you to check out below. Let us know what you thought about the show by tweeting us: @TheRumbleRamble.

It was ultra silly vs. ultra serious in this pre-show tag match. Breezango have honed their skills to the point that I don’t think it’s possible for them to not be entertaining. There were some comedy spots (as you would expect with the lineup), but some great wrestling as well.

Entertainment won out in the end when Tye Dillinger scored the victory for his team with his Perfect 10.

We kicked off the main show with Nakamura and Rusev. Aiden English got his voice back just in time to sing/rap a Rusev Day song, all he needed was a beatboxer.

Rusev and Nakamura got to work on each other quickly, but when Nakamura began his usual spots, Rusev got out of the ring for a pep talk from Aiden English. He took a little too long to get back in and Nakamura lost his patience, getting out of the ring to bring him back in, beating him down along the way.

Nakamura needed the win going into his Championship match at Mania in a few weeks, but Rusev was not beaten easily and Shinsuke put him over even more by making it look like everything he did was painful as hell.

In comparison with the one before, this match started off somewhat lackluster. Orton and Roode moved at a slow, methodical pace, sizing each other up for a long while. Everything Orton does is pretty, but not necessarily exciting. They picked up the pace toward the end with a few near falls and bigger spots.

This went just a little too long, but if you take out all of the filler, they had a decent match.

Jinder Mahal came out post-match to lay the groundwork for a potential three-way in the future, but Bobby Roode got the last laugh with Glorious DDTs to both Mahal and Orton.

Naomi and Becky Lynch vs. Natalya and Carmella

RING THE ALARM… because @BeckyLynchWWE is bringing the STRAIGHT ?????!#WWEFastlane pic.twitter.com/RfF3OxQmtT

The order of the segments/matches was not the best. The crowd was pretty worn out after the slow US Championship match and over-the-top Mania video package (that had nothing to do with the show, by the way), but these ladies still managed to draw a small reaction.

The heels were dominant from the start, making us think Team Glow-fire would be taking the W, and although they did put up a fight, they were not able to bring down Team Cat-ten Island.

The Usos vs. The New Day (Xavier Woods & Kofi Kingston)

This match brought the crowd back from the dead straight from the start. Not only did they get pancakes during The New Day entrance, but they also got New Day shirts fresh from Big E’s trunks.

These guys are not fans of the methodical approach and went after each other at a blistering speed. The Usos and The New Day know each other well, and when their own move sets didn’t work, they started using each others’.

Just as they had built up a massive amount of momentum, The Bludgeon Brothers’ music hit and Harper and Rowan walked to the ring, giant hammers in hand. They proceeded to brutalize both teams until all 5 men were laid out motionless on the ground.

The segment ended with the medical team coming down to tend to The Usos and The New Day while The Bludgeon Brothers walked back up the ramp.

Ruby Riott came down without her Riott Squad, but it didn’t take long before they were at ringside, distracting Charlotte while Ruby delivered a kick to the back of her head. Naomi and Becky Lynch did not like this and ran down to even the odds and keep them away from The Queen.

It’s not often that Charlotte is in the ring with someone who can hold a candle to her in the talent department, but she and Ruby are fairly evenly matched. Both The Riott Squad and Lynch/Naomi were eventually ejected from ringside, but not before The Riott Squad put the boots to Charlotte while the referee’s back was turned.

This wasn’t good ‘for a women’s match,’ this was a great match, period. This is what happens when you put two top competitors in the ring together.

After Charlotte brought Ruby down with the Figure-Eight, Asuka came to the ring to choose her opponent at WrestleMania to a massive reaction from the audience (and us).

Absolutely NO MERCY being shown by The #LoneWolf @BaronCorbinWWE…#WWEFastlane #WWEChampionship pic.twitter.com/1IjwuakzO2

With Shane O’Mac at ringside, the 6 competitors came to the ring to battle for the WWE Championship. Things started off hot, with John Cena hitting everyone but AJ Styles with an AA, leaving the two of them one-on-one. Before things could heat up between them, however, the other 4 men climbed back in the ring and, with Styles, took Cena out of the picture.

The action quickly spilled out of the ring, the men pairing up and brawling around ringside. All 6 men were rarely in the ring at once, which is a good strategy with a multi-man match this large. Every time someone had one of their opponents pinned, a third man would break it up.

At one point Sami Zayn and Kevin Owens were in the ring alone, and true to his word, Zayn laid down for his best friend, but Kevin didn’t trust him and tried to make it real by powerbombing him. Zayn reversed it and the two went to town for several minutes, drawing a “this is awesome” chant.

Owens accidentally kicked Shane right in the head, which angered McMahon enough that he cost both Owens and Zayn the match by pulling them out of the ring during each of their near-victories.

After nearly 30 minutes of non-stop action, AJ Styles retained his WWE Championship with a Phenomenal Forearm to Kevin Owens.

What letter grade would you give tonight’s show? #WWEFastlane