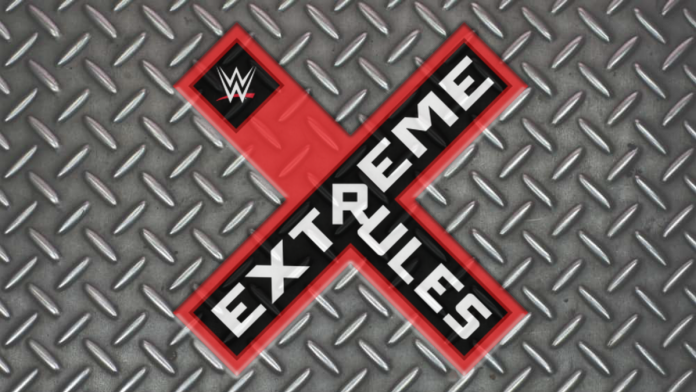 WWE Extreme Rules 2018 just wrapped up. We’ve got the match results and our overall thoughts on the show for you to check out below. Let us know what you thought about the show by tweeting us, @TheRumbleRamble.

In a rematch of their bout on SmackDown Live, ex-friends Sin Cara and Andrade Almas had a super fun contest to kick things off.

This was an even back and forth until Almas’ advocate, Zelina Vega, distracted both the referee and Andrade’s opponent, Sin Cara. Andrade took advantage of the interference and pinned Sin Cara for the victory. This feud was entertaining, but hopefully, Almas can now move on to something a little more high profile, as he is an elite-level talent.

The New Day vs. SAnitY

In similar fashion to their recent match on SmackDown Live, The New Day attacked their opponents the moment the bell rang. SAnitY would not be defeated so easily, however, and came back with a vengeance, eventually putting Kofi Kingston through a table.

The Deletors of Worlds (c) vs. The B-Team

Real-life brothers, Bo Dallas and Bray Wyatt, continued to tease us with the possibility of their first ever face-off in the ring, and we finally got a taste of it toward the end of the bout.

Wyatt and Hardy were intent on getting some revenge for The B-Team’s mockery of their partnership in recent weeks but were unable to overcome the undefeated Dallas and Axel. We expected The Deletors to get a win here since The B-Team basically crushed them throughout the entire feud, but apparently, B really does stand for best.

Stephanie McMahon’s personally appointed Constable of Raw, Baron Corbin, took this opportunity to beat Bálor down for saying he looked like a TGI Friday’s waiter.

Corbin was able to keep the upper hand through the vast majority of the match, but Bálor was a little too good for The Lone Constable and pulled out the victory at the last second.

With James Ellsworth in a shark cage high(ish) above the ring, pockets full of various foreign objects, Asuka took on the SmackDown Women’s Champion, Carmella. Ellsworth dropped the objects down to the princess to sway the odds in her favor, but Asuka prevented Mella’s use of them.

When his attempts to assist from the cage failed, Ellsworth tried to escape but was trapped hanging upside down after his foot was “caught” in the metal. Officials came to assist him, but Asuka threw them to the side and then turned her sights to Ellsworth. In all the confusion, Carmella attacked Asuka from behind, pinning The Empress to retain her title.

In a fit of frustration, Asuka continued to lay the smackdown on Ellsworth after the match.

Shinsuke Nakamura took the easy way out and low-blowed the United States Champion, Jeff Hardy, before the match even began. Once the bell had rung, Nakamura pinned him for the win after hitting a Kinshasa.

While Nakamura was celebrating, Randy Orton came out and added further injury to Jeff’s Hardy Boys by stomping them while he was down, eyeing Shinsuke and his new US Championship while he did it.

In a move that should be no surprise to anyone, Kevin Owens made a break for it the moment the bell rang, trying his best to scale the cage before Strowman could catch him, but no dice. Braun yanked Owens back into the ring and proceeded to mercilessly abuse the prizefighter.

Owens handcuffed The Monster to the ropes to prevent any more punishment and made a second attempt at climbing the cage. He made it up this time, but Strowman broke the cuffs and caught up with him, throwing Owens through an announce table from the top of the cage.

Because of this, Kevin Owens technically won the match, but Strowman was the one who walked away head held high, proud of the destruction he had caused.

The Bludgeon Brothers (c) vs. Team Hell No

Even under handicap conditions, Daniel Bryan gave Harper and Rowan a run for their money, managing to deal damage to both Bludgeons before they started to overpower him. Kane couldn’t leave his partner hanging and made his entrance mid-match, equipped with a walking boot.

Unfortunately for Team Hell No, The Bludgeon Brothers were just too much for an essentially solo Daniel Bryan, as Kane could only help so much with his injury, and retained their titles in the end.

This match desperately needed some sort of stipulation to garner some interest. We were hoping it would become no disqualification at the last minute, but of course, it didn’t.

They started out slow, but Roman eventually violently threw Lashley out of the ring, catching the audience’s attention in the process. The two went back and forth, Lashley suplexing Reigns onto the announce table at one point, until Lashley won the match by intercepting the spear with one of his own.

With Mickie James and Natalya in their respective corners, Ronda Rousey in the front row, and an Extreme Rules stipulation, this match had plenty of opportunity for shenanigans.

Alexa immediately went for the kendo stick, getting in one shot before Nia snatched it away and broke it in half. Mickie tried to help Alexa but was attacked by Natalya at ringside. Bliss came to her aid and the two of them went to work on Natalya until Rousey jumped the barricade and absolutely demolished Mickie. She then went after Alexa but was beaten down with a kendo stick by Mickie James before she could get her hands on the champ.

Because of this, Rousey was incapacitated, allowing Alexa to pin Nia Jax. Bliss knew better than to wait around and quickly left with her title while Rousey watched angrily from the ring.

These two wasted no time in getting the action started. Rusev dominated early on, working Styles’ mid-section, but Styles evened things out with a Phenomenal Forearm to the outside.

Rusev and Styles threw everything they had at each other, but they seemed to each have a counter for everything the other attempted. Styles continuously worked Rusev’s knee, a smart move by the champion, as it ultimately prevented Rusev from locking in the Accolade.

After a few near-falls on AJ Styles with no success, Aiden English removed the padding from one of the turnbuckles, but it backfired when Rusev went into it face first. It took a face full of turnbuckle and back-to-back Phenomenal Forearms, but AJ Styles finally brought down the Bulgarian Brute and escaped with his championship.

.@WWERollins pulling out ALL the stops to get the first pinfall in this #IronMan Match. #ExtremeRules pic.twitter.com/mHM1xRDf7y

After a short 5 minutes, Rollins gained the first fall with a buckle bomb. Drew McIntyre watched ominously from ringside, more than likely ready to interfere in support of his partner at any moment.

To the dismay of both McIntyre and Ziggler, Rollins quickly got another pin with a curb stomp. As expected, McIntyre inserted himself into the action, putting the boots to Rollins, but costing Ziggler a fall via disqualification. McIntyre was removed from ringside and Rollins was up 3-0, but Ziggler took advantage of the debilitated Kingslayer and gained three falls before Rollins could get his feet back under him, evening the score.

Ziggler got yet another pinfall by holding Rollins down with his feet on the rope, making the score 4-3. The two were then caught in a stalemate for several minutes, each doing damage to the other, but neither able to secure the pin.

After wearing Ziggler down with his best shots, Rollins tied things up again at 4-4 with three minutes to spare. Rollins was about to win this epic match with a curb stomp, but time ran out before he could pin the champ. It seemed the match ended in a draw, but Kurt Angle appeared, mic in hand, before Ziggler could leave with the title and announced that the match would be restarted and the first man to get the pin would be the winner.

Drew McIntyre wasn’t leaving anything up to chance and interfered the moment the match restarted, costing Rollins the victory.

What letter grade would you give tonight’s show? #ExtremeRules