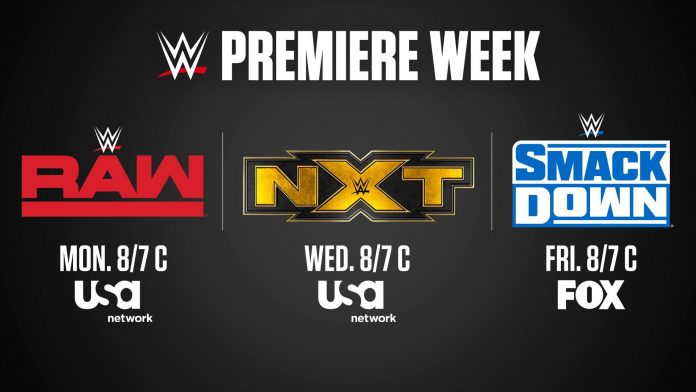 A new era of WWE will officially begin this coming Monday and, as with everything they do, WWE will be kicking it off with a bang. WWE has dubbed the start of their next chapter Premiere Week, as it is absolutely jam-packed with new starts.

Along with the season premiere of Raw, SmackDown’s move to FOX, NXT’s first full two-hour episode on USA Network, and the start of Total Divas Season 9, making this a record amount of television content that doesn’t even include the upcoming talk show, WWE Backstage, WWE will be shuffling the commentary teams for their weekly shows.

The commentary teams will be laid out as follows:


Though Renee Young is listed as a “special contributor” rather than a regular commentator, her presence will still be felt on the blue brand. Not to mention she will be headlining WWE’s newest addition to their line-up, WWE Backstage, when it airs in November.

And to cap it all off, there will be a half-hour “blue carpet” special serving as the kick-off to SmackDown on FOX which will include celebrities, current WWE Superstars, and WWE Legends’ arrival to the Staples Center.

Needless to say, we couldn’t be more excited for Premiere Week and the next chapter of WWE.


Are you excited for WWE Premiere Week? Let us know on Twitter, @TheRumbleRamble.