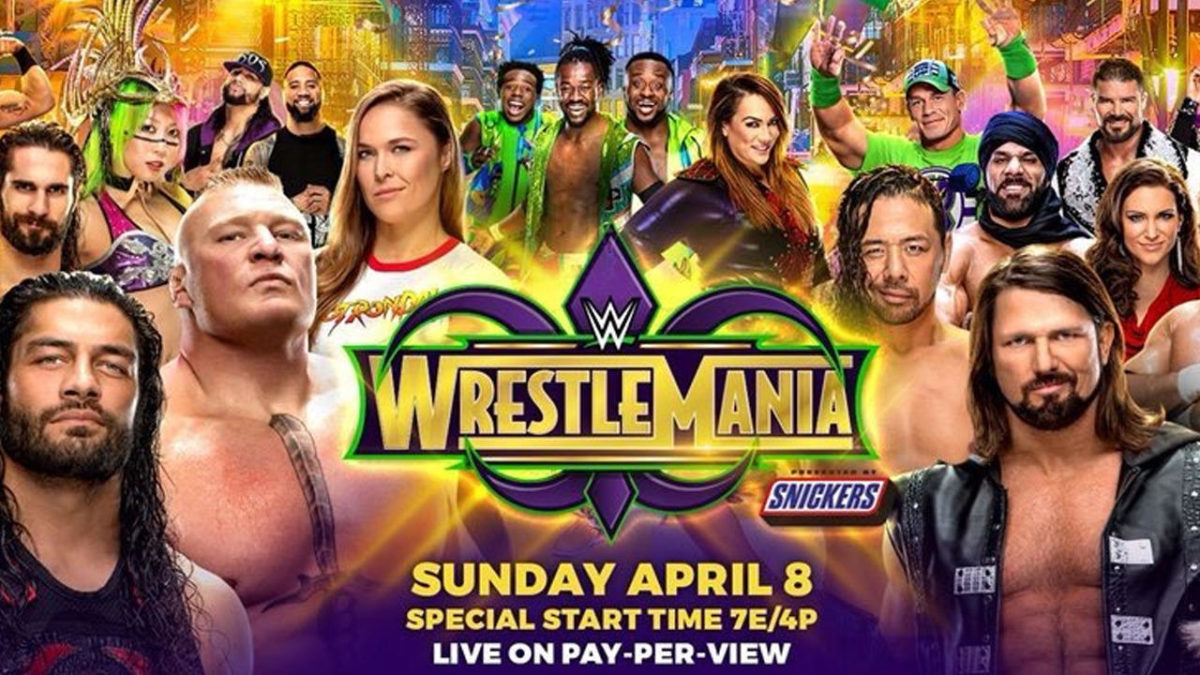 WrestleMania 34 went down last night, April 8th, live on the WWE Network. We’ve got the match results and our overall thoughts on the show for you to check out below. Let us know what you thought about the show by tweeting us, @TheRumbleRamble.

The opening contest featured Matt Hardy winning the Andre the Giant Memorial Battle Royal with the help of Bray Wyatt. There were no surprise entrants in this match, no guys from NXT or past WWE legends, which was a bit of a surprise and a letdown, initially, but the ending changed our minds.

The HEART of #205Live @MustafaAliWWE is pulling out ALL the stops in trying to capture the @WWE #Cruiserweight Championship! #WrestleMania pic.twitter.com/DM7uKy9S4I

This match was awesome, although it would have been nice to see it get about 5 more minutes. These two pulled out all of the stops in order to have a match worthy of the WrestleMania stage. Cedric Alexander got the win via the Lumbar Check. They embraced each other after the match, which was nice to see and solidified the storyline of ‘two friends battling it out to determine who was best’.

Unlike the men’s battle royal, this match featured quite a few people from NXT; they even formed a sort of faction through the first half of the match to take down some of the main roster ladies. The finish was awesome. Bayley thought she had won the match, eliminating Sasha Banks to get the win, but quickly realized that Naomi was still in the match, who eliminated The Huggable One to get the win.

The Miz (c) vs. Finn Bálor vs. Seth Rollins

That’s one way to break up a pin attempt!#WrestleMania @FinnBalor pic.twitter.com/pfsrbpiTzJ

This was the perfect match to start off the main card, as the fans were hot for all three guys, and the action was fast-paced and exciting. Seth Rollins got the win via the Curb Stomp on The Miz, capturing his first ever Intercontinental Championship.

Quite possibly the best match of the night, and one of our favorites of the year so far, this one gets the highest of praise. Asuka’s streak had become a bit of crutch, meaning WWE would rely on it to tell the story of every single match she had. Asuka is much better than a streak, so now that it’s over, she should be able to have more exciting and less predictable matches in the future. Charlotte got the win when she tapped out The Empress with the Figure Eight.

This is what we call… VINTAGE @RandyOrton. #WrestleMania pic.twitter.com/ndDD0qFuTL

This felt like a missed opportunity to make a WrestleMania moment, as fans really wanted to see Rusev with the championship. That being said, Jinder Mahal winning isn’t the worst thing that could happen, because Rusev is more than likely going to be his first feud as champion. As long as Rusev gets the title eventually, we’re okay with Jinder getting the win for now.

If Asuka//Charlotte wasn’t your Match of the Night, then this probably was. Ronda Rousey looked great in her first ever pro wrestling match, and her supporting cast wasn’t too bad, either. This couldn’t have gone better, and WWE appears to have a huge star on their hands with Ronda.

The Usos (c) vs. The Bludgeon Brothers vs. The New Day

For the first time on the main show at #WrestleMania, The @WWEUsos go AIRBORNE! pic.twitter.com/RSWjVoC5H3

This match was nothing more than a squash match to get the titles on the Bludgeon Brothers, which isn’t necessarily a bad thing. The fans were dead after the previous match, which is understandable, so the crowd reactions were non-existent. The Bludgeon Brothers have beaten every team on SmackDown Live, so theoretically, The Authors of Pain could be next in line for a shot at facing them.

John Cena vs. The Undertaker

The match you thought you would NEVER see…is LIVE on @WWENetwork, and The #Undertaker just went OLD SCHOOL on @JohnCena! #WrestleMania pic.twitter.com/DBII59qVS7

The Undertaker showed up at WrestleMania and destroyed John Cena in less than five minutes. The fans were still excited to see The Undertaker, who looked very healthy, but this wasn’t what it could have been four or five years ago.

This was the moment WWE completely lost the fans and never could get them back. Daniel Bryan’s entrance was one of, if not the biggest reaction of the night. Unfortunately, Kevin Owens and Sami Zayn attacked him prior to the match, meaning Shane McMahon did the majority of the work, which isn’t what the live crowd wanted to see. Daniel and Shane did get the win, and Daniel looked like his old self, but the layout of this match was poor and really hurt the show.

Nia Jax got a much-needed win over Alexa Bliss, who had been bullying her for weeks on Raw. Nia destroyed Mickie James prior to the match to remove any possibility of an interference, and although Alexa got in some offense, it wasn’t enough to get the win.

We are off to a FAST and FURIOUS start in this #WWEChampionship match!#WrestleMania @AJStylesOrg @ShinsukeN pic.twitter.com/ChisWmSB8n

Although this bout was very good, it did fail to meet expectations. Fans had been in the Superdome for a very long time at this point, so that probably didn’t help, either. After the match, Shinsuke turned heel, which is an interesting move, to say the least. This is not the last AJ/Shinsuke match we’ll see this year, and the idea of a heel Shinsuke Nakamura facing off with Daniel Bryan is exciting enough that we’ll give this a chance.

The Bar (c) vs. Braun Strowman and Nicholas

Perhaps the most polarizing moment on the show; fans either loved or hated this, there is no in between. Braun went into the crowd and got a ten year old boy to be his tag partner. He defeated The Bar single-handedly, capturing the Raw Tag Team Championship titles with Nicholas, the fan from the crowd.

WWE is going to have to figure out a different way to do WrestleMania, because their 7-8 hour format is too much for fans to digest. Perhaps a two day format is the way to go, but no matter what they do, they have to change things up, because the way they’ve done the show the past few years isn’t going to work if they ever want another all-time classic.

What letter grade would you give tonight’s show? #WrestleMania