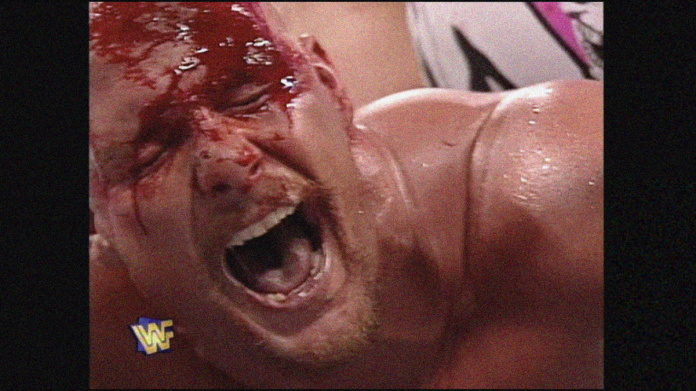 Welcome everyone, to a Retro Rambles review of an old-school WWF event! This week, we’re covering WrestleMania 13, from March 24, 1997, which you can find on the WWE Network here.


We kicked things off with a fun WrestleMania-themed video package showcasing various highlights of the biggest moments from the previous 12 WrestleMania events. Fun stuff.

After a small (for WrestleMania standards) pyro display, we went right into the entrances for the first match, which was a bit… jarring. I’m so used to the spectacle that is WrestleMania, with all the pageantry and whatnot, and this is just not one of those shows.

Seriously, not seeing someone sing “American the Beautiful” before the show started, combined with an arena ‘Mania with a small stage (I do get why the stage was small, gotta sell those tickets…), isn’t really what I think of when I think WrestleMania.

I did pop huge for the PlayStation blimp that was flying around the arena, though. Ah, the 90’s…


The New Blackjacks vs. The Godwinns (w/ Hillbilly Jim) vs. The Headbangers  vs. Doug Furnas and Phil LaFon

We kicked things off with a fatal 4-way elimination tag team match, with the winners becoming the number one contenders for the WWF Tag Team Championship titles. I like the added stakes, but with no build, and no real hot acts involved, this match struggled to get any reaction from the crowd.

Anyone could tag in anyone, which led to some fun moments during the bout, but again, the crowd just didn’t care about this one at all. Not really a bad match, but nothing to write home about, either, which is kind of the theme for 95% of this show.

The Headbangers were solid here, however, and I’m glad to see they got the win. Their schtick feels very 1997 to me, and I love tag team wrestling, but WWF just isn’t quite ready to invest a lot of time and energy into the division. Maybe in a few years?


Rocky Maivia (c) vs. The Sultan (w/ Bob Backlund and The Iron Sheik)

Up next was our first of three title matches, which is a bit odd to type out, if I’m being honest. There are only 7 matches on this show, and only 3 of them are title matches. That’s a WrestleMania preshow nowadays.

Both Rocky and The Sultan have no real interest from the crowd here, and much like the opening contest, this match suffers a lot because of it. I actually like a lot of what both guys are doing, and there’s enough here to see why both eventually became stars (The Rock and Rikishi) but it just wasn’t there yet.

Rocky’s going to get the win with a rollup, but of course, we aren’t done. The Sultan, along with The Sheik and Bob Backlund, attack Rocky from behind post-match. Rocky Johnson, Rock’s dad, comes out and makes the save.

The two have an awkward embrace in the ring to close out the segment.

On paper, this match probably should have been better than it was… but it wasn’t, for whatever reason.

They actually started off on the right foot, with Goldust doing Goldust things to get in the head of Helmsley and gain the early advantage. But things never went into that next gear and the match kind of suffered as a result.

The most intriguing element to this match was easily Chyna. She already feels like a huge star at this point and it’s easy to see why she ended up being a pretty big deal… for a few years, at least.

A scuffle with Marlena is enough of a distraction to allow Helmsley to get the win via The Pedigree. I’m excited to watch Helmsley and Chyna progress as a duo together going forward.

Before the match, we got the birth of HBK computer meme, which, combined with the Austin/Hart match, is just enough to make this show passable for me.

All four of these guys are great and managed to have what was probably my second or third favorite match of the night. Things ending in a double count-out is a bit disappointing, as that finish works most of the time, but not at WrestleMania.

I am, however, excited to see more of Bulldog and Owen going forward, and I like the Mankind/Vader pairing a lot, too.


Author’s note: It’s not an original answer to the “what’s your favorite match of all time?” question, but this is easily my favorite match of all time. Because of this, I’m probably going to fan out a bit while talking about it. I also want to share a few interesting links, as I’m not the only person who loves this match, and there’s a ton of cool stuff out there on it…


Ken Shamrock comes out first, and he’s wearing the greatest referee outfit of all time. Seriously, if you’re reading this, tweet Caitlin pictures of Shamrock in this outfit, it’ll make her day.

Shamrock is actually really fantastic here and adds a ton to the match, which is a testament to how good he is at pro wrestling.

Austin has a cool glass break entrance, which is the only entrance on the show that has a bit of WrestleMania flare to it. That kind of says how the company was feeling about Stone Cold at the time, huh?

We get a hot start initiated by Austin, which was shot extremely well. The two quickly brawled to the floor, and then into the crowd, which is just my kind of wrestling. Speaking of the crowd, they had been quiet all night up to this point, but they went nuts for everything these two did in this match.

The format of this match is the Attitude Era main event format that we’re going to see a ton of going forward. It doesn’t get any better than this, though.

In the crowd, Austin takes a back body drop onto the stairs that the fans use to get to their seats, which couldn’t have felt good. The camera kind of misses it, and a lot of the crowd action here, but that kind of adds to the chaos somehow?

Bret Hart goes after Steve Austin’s leg, which makes a ton of sense, because of The Sharpshooter and the submission match stipulation. It’s a simple story, but a good one, and both men do a good job of telling it.

We get that cool Figure Four ring post spot that Bret saves for all of his big matches. He then grabs a chair and wants to break Austin’s leg with it, as Austin did the same to Brian Pillman during the buildup to this match. Austin blocks it and then smashes Bret in the head with the chair.

Austin then begins applying submission holds of his own. He’s obviously not a submissions guy, but he makes it work here because he’s one of the best to ever do it.

Back on the floor, Bret sends Austin into the announcer’s table and the guard rail, headfirst. Austin’s bleeding, and Bret’s punching him right in that wound, drawing more blood. I LOVE IT.

Bret goes back to work on the legs and even gets The Sharpshooter locked in, but Austin fights out of it. Austin, with not much left at this point, Irish whips Bret hard into the corner chest-first.

Austin then tries to choke out Hart with an extension cord, which is exactly what someone in a submission match with no submission holds should do. Bret grabs a ring bell that was nearby (it had been introduced earlier in the match) and hits Austin in the head with it.

JR’s call of “…and Bret Hart just rang Steve Austin’s bell” is pretty incredible and not talked about enough.

We then go into the closing moments of the match, the footage of which has probably been replayed more times than anything else in WWE history… and for good reason.

Bret gets Stone Cold in The Sharpshooter, and Austin tries to fight out of it, but just can’t escape. Austin’s got his own blood running down his face, JR is screaming, and eventually, Austin just passes out, losing the match as a result.

Everything about this, from a production standpoint to the commentary, to the actually in-ring work itself, is as good as it gets in pro wrestling. Incredible, incredible stuff.

Consider donating to our Patreon, where you’ll gain access to Operation Raw is War, our podcast series covering WWF’s weekly shows and pay-per-views.

The Legion of Doom and Ahmed Johnson vs. The Nation of Domination

My one big takeaway from this match is that it probably should have opened the show. The crowd was hot for this one and really wanted to see LoD, the hometown guys. Letting LoD get the people going early on in the night probably could have helped the overall flow of this show.

There’s a lot going on here, with all kinds of weapons (including the kitchen sink) being used. There’s a spot involving a noose and Ahmed Johnson that just… doesn’t age well. In fact, that was probably too much in 1997.

Someone accidentally uses a real fire extinguisher at ringside, causing everyone in the front row (and the commentators) to have a choking fit. That’s incredibly funny to me for some reason.

The good guys get the win, much to the delight of the crowd.

Winner: The Legion of Doom and Ahmed Johnson


Sycho Sid (c) vs. The Undertaker

No Disqualification Match for the WWF Championship


Shawn Michaels is on the headsets for this one. He brings with him a ton of inside baseball and shots at Bret Hart, which is… sure, I guess. Speaking of Bret Hart, he came out before the match to run his mouth, so Sid powerbombed him.

The Undertaker has the classic Undertaker ‘fit on, which popped me. I love that look. This one is very slow-paced, which is expected, but not necessarily the way I want a WrestleMania to end.

Bret Hart eventually shows back up and hits Sid with a chair, but there’s no DQ, so it’s legal. After a Chokeslam and a Tombstone, we’ve got a new WWF Champion!

We go off the air with The Undertaker posing in the ring, which is very much WrestleMania and always neat to see. Overall, outside of Austin/Hart, there’s not much worth checking out here.


Have some thoughts on WrestleMania 13 or our review? Send ’em our way on Twitter, @TheRumbleRamble.