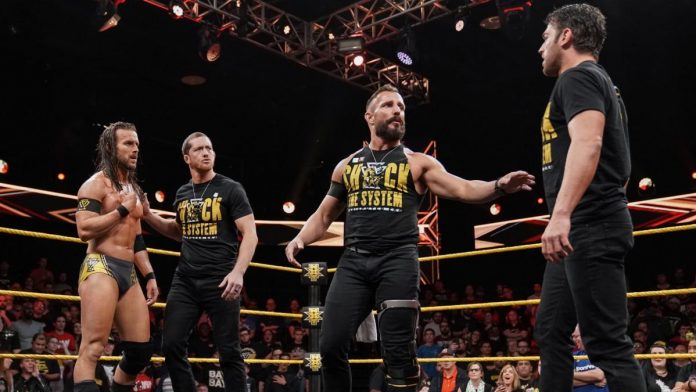 If you keep up with NXT TV, you know that Undisputed Era kicked off 2019 with the promise that it would be the year of Undisputed. Unfortunately for the powerhouse of NXT, this dream quickly began to slip away from them, as they lost the NXT Tag Team Championships to War Raiders at TakeOver: Phoenix in January.

Although they started the year with a bit of a backslide, there is no doubt that, with a little hard work, they could have pulled it together, as they have proven before that the strength provided by their numbers and loyalty to each other is enough to overcome most obstacles.

The loss of momentum seems to have chipped away at their bond rather than creating a resolve to strengthen it, however, the rift becoming most pronounced between Adam Cole and Roderick Strong.

The two appear to blame each other for the group’s recent losing streak, the tension coming to a head after Wednesday’s episode of NXT where Adam Cole suffered a loss at the hands of Matt Riddle.

After the show, Cole and Strong burst out of the arena and into a heated argument ending with Roderick Strong throwing both his Undisputed Era shirt and armband at the other three members, while Adam Cole screamed that he wasn’t worthy to be in the group anyway.

Much of the conversation was incomprehensible due to the amount of cursing, and therefore editing, that the clip contained, but it’s evident that Cole and Strong are officially at odds with one another.

At this point, it’s unclear where the other two, Kyle O’Reilly and Bobby Fish, stand in the disagreement, though they followed Adam Cole back into the building as Roderick Strong left in a rage. O’Reilly looked to consider following Strong but chose instead to watch him leave, albeit sadly.

This could be the beginning of the end of Undisputed Era, or at least of the quartet rather than the trio. Undisputed Era is an excellent faction and a long-time staple of the NXT brand, but we can’t help but imagine Kyle O’Reilly and Roderick Strong as a separate tag team and how phenomenal their run would be.

No matter the future of the group, Adam Cole, Roderick Strong, Kyle O’Reilly, and Bobby Fish have already cemented their position as the best stable in NXT history – and that’s undisputed.


What do you think the future holds for Undisputed Era? Can they overcome their differences? Let us know on Twitter, @TheRumbleRamble.