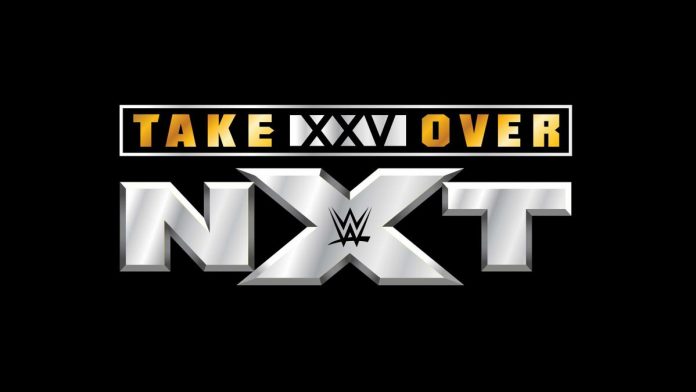 The full match card for this landmark event in NXT’s already impressive history has been announced, and stands as follows:


Undisputed Era kicked off the year by claiming that it would be the year of Undisputed…and have been on a rather epic losing streak ever since, even very nearly breaking up because of the mounting tension between Roderick Strong and Adam Cole. But now that they are on the same page again, Roderick Strong will be out to shift the momentum back in Undisputed Era’s favor.


NXT’s Golden Boy, Tyler Breeze, made his return to the yellow brand last week on NXT TV, and wasted no time in going after the North American Champion and fellow diva, Velveteen Dream. As expected, the crowd went absolutely wild seeing these two eye-to-eye in the ring, and even more so when they discovered that the pair would be facing off for the title at TakeOver XXV.


Oney Lorcan and Danny Burch vs. The Street Profits vs. The Undisputed Era (Kyle O’Reilly and Bobby Fish) vs. The Forgotten Sons


Now that The Viking Raiders have made their move up to the main roster, the NXT Tag Team Championships are up for grabs. Since no less than four tag teams laid claim to the vacated titles, they will be put to the ultimate test to prove which duo is truly worthy of being champions. Four of the top tag teams in NXT will compete in a ladder match, the winners of which will become NXT Tag Team Champions.


Recently, Io Shirai’s good friend and former tag team partner, Kairi Sane, fought Shayna Baszler one last time and failed. At TakeOver XXV, the remaining half of the Sky Pirates will be out to avenge her friend and finally dethrone the Queen of Spades, ending her tyrannical reign over the NXT Women’s Division in the process.


Since defeating Adam Cole and becoming the first-ever NXT Triple Crown Champion, Johnny Gargano has led the yellow brand with all the modesty and grace you would expect from the heart of NXT. And was almost immediately met with hostility from Cole and his band of villains known as Undisputed Era. As a result of this, Johnny Champion will be defending both his title and his name against the Undisputed ring leader at TakeOver XXV.


How are you feeling about the NXT TakeOver XXV match card? Let us know on Twitter, @TheRumbleRamble.