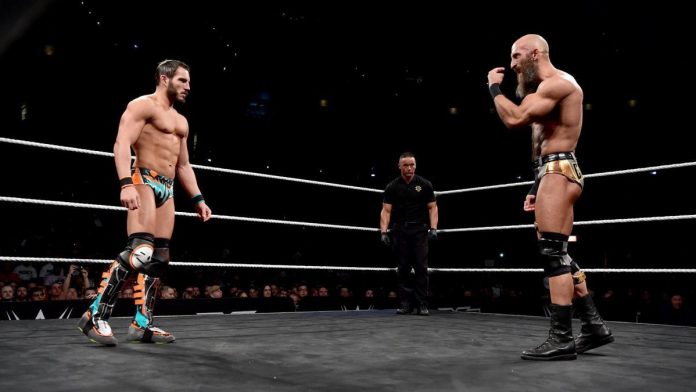 Tommaso Ciampa and Johnny Gargano’s run in NXT couldn’t have started off any better than it did. The two first appeared on the scene in September of 2015 as surprise entrants in the first-ever Dusty Rhodes Tag Team Classic. Two extremely talented guys with similar backgrounds and paths to WWE teaming up and joining forces made a lot of sense, so the idea of a Ciampa and Gargano tag team was exciting to NXT fans, to say the least. Soon after, the duo were major players in the NXT tag division, participating in some of the biggest matches and moments of both 2016 and 2017.

In the fall of 2016, the team captured their first and only NXT Tag Team Championship, defeating The Revival at NXT TakeOver: Toronto in a Match of the Year contender. Ciampa and Gargano had a series of matches with The Revival, as well as The Authors of Pain, that were regarded as some of the best tag team matches in the history of WWE.

Most fans, including us, couldn’t wait to see the team of Ciampa and Gargano (DIY) take over the tag division on either Raw or SmackDown Live. Fans were salivating at the idea of tag team bouts featuring DIY and the The New Day, The Bar, and The Usos. Despite this, there were always thoughts about how appealing a blood feud between them would be.

The idea was initially teased when Ciampa and Gargano faced off in a brutal showdown in the first round of the Cruiserweight Classic in June of 2016, only a few short months before their eventual NXT Tag Team Championship victory. During the match, the seeds were planted for an eventual Ciampa heel turn, but the two remained a team afterward nonetheless. There were even jokes made about a possible breakup on Twitter, adding more fuel to the fire.

You could tell early on that Ciampa had doubts about his friendship with Gargano…
(Photo Credit: WWE.com)

As beautiful as the initial pairing of Ciampa and Gargano was, their breakup was even more so. After failing to recapture the NXT Tag Team Championship, Ciampa turned on Gargano to close out the TakeOver: Chicago show in May of 2017. Unfortunately, Ciampa had a legitimate knee injury and was forced to take close to a year off to recover. At first, the idea of Ciampa being forced to leave television when the feud with Gargano was hot off the press seemed like a negative, but in reality, it did more to help the build than hurt it, as an eventual meeting between the two in the ring only became more appealing over time.

While Ciampa was on the sidelines, Gargano broke out as a major singles star, putting on memorable performances each and every timed he stepped into an NXT ring. Although he was tearing the house down on a nightly basis, Gargano couldn’t escape the presence of his former tag partner and best friend.

At TakeOver: Brooklyn III in August of 2017, Gargano failed to defeat Andrade “Cien” Almas after Zelina Vega threw a DIY t-shirt into the ring. Gargano was taken aback by the memories of his DIY days, which allowed for Almas to get the win. Ciampa was still doing damage to Gargano without being there, which is a compliment to how strong the writing for this feud has been.

Almas and Gargano had one of the best matches to ever take place in a WWE ring at TakeOver: Philadelphia in January of this year, but once again, Gargano couldn’t defeat Almas, failing to capture the NXT Championship in the process.

Ciampa knees Gargano in the face after their match at TakeOver: Chicago.
(Photo Credit: WWE.com)

It was at this time that Ciampa entered the picture again, attacking Gargano while he was at his lowest of lows after his match with Almas. Ciampa made up for lost time by instantly becoming the most hated man in NXT, thriving in the role of the company’s top heel.
The next week Gargano put his NXT career on the line in order to get another shot at Almas and the NXT Championship, but thanks to Ciampa, failed yet again. This meant the end of Gargano in NXT, or so it seemed. Last week, while Ciampa was circling the ringside area and berating fans, Gargano appeared in the crowd and attacked him, putting hands on Ciampa for the first time since their bout in the Cruiserweight Classic almost two years ago.

Over the weeks prior, Ciampa had been entering the ring and attempting to explain his actions on the microphone, but couldn’t get a word out over the chorus of boos and chants from the NXT Universe. With a deranged look on his face, Ciampa would walk around the ringside area and get into it with fans who had signs supporting Gargano. This act eventually leading to Gargano getting a bit of revenge was a spot of creative genius.

The Psycho Killer lives up to his name as he winds up to smash a crutch over Gargano’s back.
(Photo Credit: WWE.com)

The stage is now set for an Unsanctioned Match between Ciampa and Gargano in less than two weeks at TakeOver: New Orleans, the night before WrestleMania 34. The build between the two best friends turned bitter enemies has been as good as any story ever told in NXT, the place in WWE where storytelling and in-ring action is at it’s best.
While the WrestleMania card may be loaded with matches like AJ Styles versus Shinsuke Nakamura and John Cena versus The Undertaker, as well as moments such as the in-ring return of Daniel Bryan and the in-ring debut of Ronda Rousey, nothing at ‘Mania will be as well-executed as Ciampa versus Gargano.

Ciampa and Gargano will get enough time to tell an amazing story in the ring, a luxury that only a few matches on a loaded WrestleMania card will be afforded. The match will also benefit by taking place in front of the hottest crowd of the weekend. As amazing as the environment at WrestleMania will be, stadium crowds are not as loud as arena crowds, due to the size of the venue and the acoustics issues that come with that.

When it’s all said and done, WWE will have provided the fans in New Orleans, as well as the fans watching all around the world, five consecutive nights of entertainment. There will undoubtedly be some amazing and historic moments that fans will be talking about for years to come. That only makes it that much more impressive that Johnny Gargano and Tommaso Ciampa will be atop that list of moments, further cementing themselves as two of the best present-day WWE has to offer.