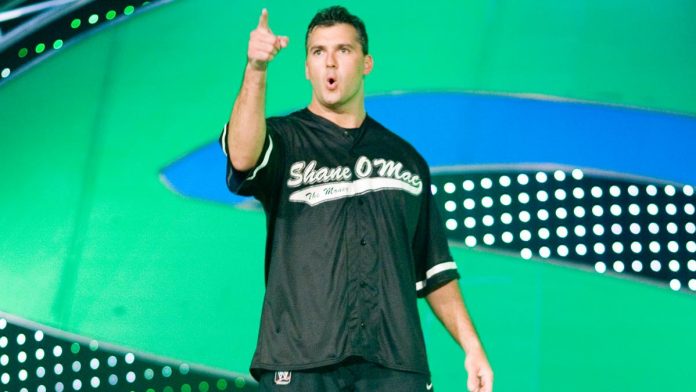 At one point during this feud, Kane electrocuted Shane McMahon’s testicles with a battery and some jumper cables… I mean, what more could you want from your ‘?

Spoiler alert: Shane McMahon jumps off of something really high during this match, which is basically the theme of this list.

If there’s ever a match worth checking out just for the finish alone, it’s this one. Even if you’ve never seen this bout, you’ve probably seen footage of Shane jumping from the SummerSlam set, because it’s one of the wildest things he’s ever done.

Matches that go longer than 30 minutes are usually a bit much for us, but this Hell in a Cell bout with Kevin Owens is one of the rare exceptions.

The finish of this match is amazingly terrifying and the level of danger that only Shane McMahon can deliver in today’s era of WWE. Seriously though, the ending is fantastic.

“Lose Her or Leave Her” Greenwich Street Fight

When we think of the Attitude Era, matches like this are what come to mind first. There’s a lot going on here, which is the case for a lot of the matches at the time, but watching Shane McMahon doing all kinds of crazy shit just never gets old.

Don’t forget to enjoy moment in the spotlight as well. He’d never get this popular ever again, for whatever reason.

This match was built around one of the more soap opera- storylines in WWE history, which may turn off some folks. But if you can look past that, or even manage to embrace it, you’ll find that this match is an absolute classic filled with excellent storytelling and dramatic moments.

Also, there’s a moment where the camera perfectly captures Vince McMahon peaking over the side of the ring that’s an all-time WrestleMania moment for us. It’s good stuff.

Leading up to this show, a lot of people, including us, didn’t have high expectations for this match. We couldn’t have been any more wrong. Not only was this match tremendous, one of the best Shane McMahon (and AJ Styles) matches of all time.

This is legitimately one of our favorite matches of all time. We could spend hours talking about how much we love it, and why, but why not read what Kurt Angle himself had to say about it:

“The match was formatted so perfectly. There was wrestling, there were highspots, there were crazy stunts, and there was a dramatic finish. Everything you want in a match, it was there.”


What are your favorite Shane McMahon matches on the WWE Network? Let us know on Twitter, @TheRumbleRamble.