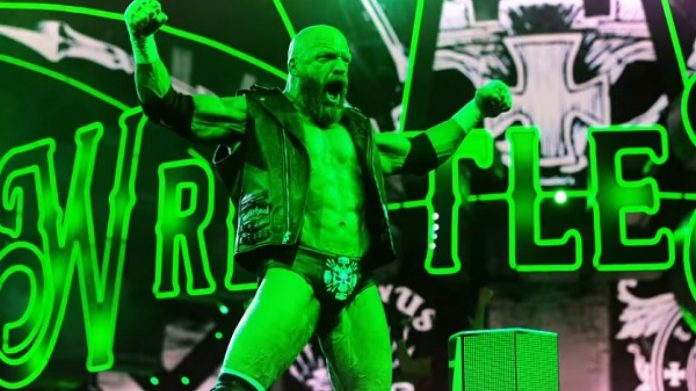 When you think of WWE, the first thing that probably comes to mind is the actual wrestling. And while that is obviously an integral component, one of my favorite parts of any wrestling show is the entrances, more specifically, the entrance music.

Listed below are the 21 best entrance themes in WWE, past and present. Keep in mind they are in very loose order because I love all 21 and it was very difficult to pick one over the other.


You know what every other song on this list is missing? Cowbell. Every song could use a little more cowbell.

But Common Man Boogie has plenty of cowbell, kicking off a funky beat and catchy lyrics. Written by Jimmy Hart and J.J. Maguire, Common Man Boogie was the soundtrack to the entrance of the incandescent American Dream, Dusty Rhodes.

Omen In The Sky


I’m not sure what it is about this Buckcherry-esque tune that’s so appealing, but Gallows and Anderson’s Omen in the Sky is up there for me in terms of the most head-bob-worthy entrance themes of the modern era.

From that first ringing note to the opening riff that is woven throughout the rest of the song, this is one I would listen to casually – and I don’t even like Buckcherry.


As insanely talented as the WWE Music group is, they aren’t afraid to collaborate with other musicians to create the perfect song when the moment calls for it.

And Rhea Ripley, one of the most dominating competitors of all the women’s divisions, needed that little something extra for her song to meet that energy.

I Bring The Darkness


Baron Corbin has a very similar vibe to Rhea Ripley…or at least he did before adopting his waiter’s uniform in-ring outfit. BUT. Now that he’s slowly making his way back to the more sinister Corbin of old, I Bring The Darkness is fitting once more.


Not just any classical piece can be used as entrance music, but the fourth movement of Antonín Dvořák’s Symphony No. 9 couldn’t be a better fit for WALTER and his cohorts.

There’s something intimidating about classical music and a competitor who chooses to enter the arena with it behind them. It can only be used in very specific situations, but when it works, there’s nothing like it.


The NWO’s theme isn’t exactly the most elaborate on the list, but it is one of the most iconic. But the less is more approach worked wonders in this instance, the combination of a few guitar chords and some subtle drums was enough to set the scene for one of the most celebrated factions in the history of wrestling.


One of the newest additions to the WWE roster brought with him one of the catchiest entrance songs in the company today. If you’re not dancing, or at least awkwardly bouncing in your seat, when Humberto Carrillo bops his way to the ring to Dale Gas, I don’t know what to tell you.

My Spanish is rusty, but I know for a fact at one point, “more fun, more delicious” is said, which basically sums up how I feel about Dale Gas.


The first on the list, besides Symphony No. 9, to simply be an outside musician’s work of art that a Superstar requested as their entrance music, CM Punk adopted Living Colour’s Cult of Personality after ditching This Fire Burns by Killswitch Engage.

WCW was known for giving their performers well-known songs for their entrances, but WWE was not, and still isn’t to this day, making CM Punk’s entrance theme that much more special.


In searching for acceptable videos to use for this article, I found that many people mistakenly believe that Finger Eleven’s Slow Chemical was written for the 2004 Punisher movie. When in actuality, Slow Chemical had been Kane’s entrance music since 2002.

That’s not to say that the song doesn’t suit both Kane and The Punisher quite well, it’s just that Kane had it first. And what an entrance theme it was.


Rey Mysterio has two WWE entrance themes that are absolute classics, and are named essentially the same thing, despite being completely different songs, which I find amusing, for some reason.

619 was his earlier WWE theme, and while there is no question that it’s a fantastic song, my favorite is Booyaka 619, specifically the Wreckless Intent version performed by P.O.D., which is still used by Mysterio today.

At Last / Just Close Your Eyes / The Brood


Does anything beat The Brood? I don’t think so. The entire entrance, including the theme, is something straight from a Blade movie. And while Edge and Gangrel also came out to this song, I’m giving it to Christian for the purpose of this list.

But Christian’s solo songs, At Last and Just Close Your Eyes, are excellent pieces of music as well. At Last definitely has more of a comical element, while Just Close Your Eyes is every angsty teenager’s anthem, but they’re both great in their own ways.

Voices & Burn In My Light


WWE got a little outside help with both of Randy Orton‘s great themes, Mercy Drive performing Burn In My Light, and Rev Theory giving us Voices, the song that has accompanied The Viper for over a decade.

Voices is my favorite of the two, as something about the slow progression of the song combined with the somewhat unsettling lyrics fits Randy Orton’s cunning, despicable persona just right.


Who doesn’t love Sexy Boy? Sung by Shawn Michaels himself, Sexy Boy is Jimmy Hart’s self-proclaimed crowning musical achievement. The song first rang through an arena way back in 1992 and has been synonymous with The Heartbreak Kid ever since.

Also, I picked this video in particular because Shawn Michaels seemingly coming down from heaven to a chorus of angels before immediately transitioning into a song appropriate for a male stripper is hilarious.


Lindsey Sterling made the combination of violin and electronic somewhat popular back in 2012, but I would have never thought to use it for entrance music. Luckily, someone else did, because Shinsuke Nakamura’s The Rising Sun is truly a piece of art.

“The Michael Jordan of the violin,” Lee England Jr., plays his heart out over a fast-paced beat, giving us a song so amazing, fans sing along despite the lack of words.

When Nakamura turned bad, vocals and additional instruments were added to his music to prevent fan interaction, and though this is also a good song, the original Rising Sun will hopefully play Nakamura to the ring again someday.

Break the Walls Down


One of, if not the most memorable debut in WWE history came with the debut one of the greatest entrance themes of all time. Was Chris Jericho set up for success or what? And rightfully so, as he had already made quite a name for himself in WCW.

Break the Walls Down is one of those songs fans associate with wrestling’s heyday. The late ’90s and early 2000s were all about grunge and grime, for which Jericho’s theme was perfectly suited. And 20 years later, the song still holds up.

Root of All Evil


A song only made better by Aleister Black rising from the dead through a sea of flickering candles during the opening riff, Root Of All Evil has the same timeless feel as any of the best-loved throwbacks.

Superstars performing their own songs is one of my favorite things when it comes to entrance music, but WWE enlisting hardcore band Incendiary to bring the song Black himself helped write to life is just as awesome.

Basic Thugonomics & The Time is Now


I know, I know, people have mixed feelings about The Time Is Now. But hear me out. There are few more iconic song openings than that slow trumpet scale followed by RRRRRRRRRRRRAAPIDO. And John Cena performing his own song? Come on. It’s incredible.

But even better than The Time Is Now is Cena’s alter-ego, the Dr. of Thugonomics’, song, Basic Thugonomics. Let me tell you, when Basic Thugonomics hit at WrestleMania 35 this past year, I almost broke my computer out of excitement.


An entrance so disturbing that it violates YouTube’s terms of service deserves an equally intense song to go along with it. And that is exactly what WWE delivered with this remix of ‘the old Bray Wyatt’s’ entrance theme Live in Fear.

Renamed Let Me In to better fit his terrifying new split personalities and performed by hardcore punk band Code Orange, The Fiend’s entrance song is one for the ages.

We only hope that The Fiend is eventually granted the honor of a live performance to accompany his slow march to the ring on the grandest stage of them all.


Xavier Woods would probably take exception to the fact that I have I Walk Alone at number 3, but out of all of the WWE entrance themes ever created, I think the #3 spot is a pretty high compliment.

Actually, if this song doesn’t get you pumped, I’m not sure anything will. Created by Saliva for Batista and WWE’s Wreckless Intent album, a compilation of entrance songs performed by popular artists, I Walk Alone, like Batista, is the epitome of WWE badassery.


Written by Alter Bridge for their album One Day Remains, WWE Music had almost no hand in this song, but the small tweaks they made gave Edge’s entrance theme the feel that we all know and love.

Adding Edge’s signature “you think you know me” from his previous entrance song named as such, and moving the crescendo at the end of the original song to the beginning of the entrance version, created what we know as Edge’s Metalingus – unless you happen to be an Alter Bridge fan.

Fun fact though, Metalingus has double the plays of Alter Bridge’s next most played song on Spotify. So I think we can safely say that this one now belongs to Edge.

Another fun fact, I love this song.


The king of entrances, it’s no surprise that Triple H has the greatest number of awesome themes of anyone on this list (and yes, I’m serious about Ode to Joy, it fit his persona at the time flawlessly and I am a sucker for classical music).

And his friendship with Motörhead’s Lemmy Kilmister gained him not one, but three of his very own metal masterpieces, including The Game, the opening note of which signals that an epic entrance is soon to follow, as Triple H only breaks it out for his biggest in-ring appearances.

Last but not least, one of the voices synonymous with the Attitude Era, Chris Warren led the way in the remaining two songs, DX’s Are You Ready and the fan-favorite Triple H anthem, My Time.