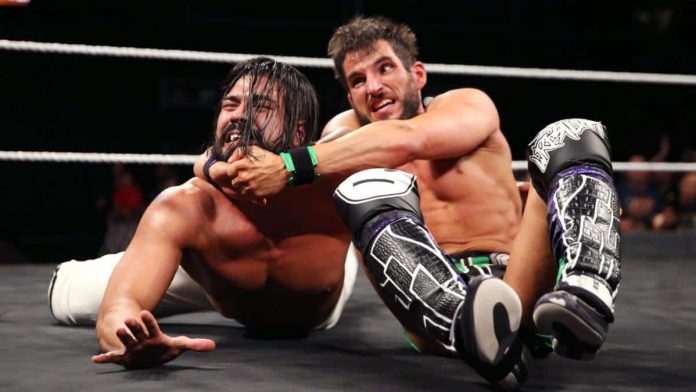 
Bonus match! This showdown between Adam Cole and Ricochet from TakeOver: Brooklyn IV was wonderful and deserves some recognition.

There’s a spot from this bout where Cole superkicks Ricochet while The One and Only is in midair (and upside down) that absolutely blew us away. These two have tremendous chemistry with one another and the perfect timing displayed in that one sequence alone is proof.


Despite having the ending spoiled weeks in advance, this match was a thrill ride from bell to bell. This bout had a little bit of everything: brawling outside of the ring, a few clever callbacks, and even a run-in that somehow didn’t completely ruin everything.

On paper it might sound like this bout was overproduced, but everyone involved managed to execute the game plan to perfection and create one of the better NXT TV matches of all time.


Wrestling fans have seen just about everything by now, especially when it comes to hardcore matches. That didn’t stop Adam Cole and Aleister Black from having one of the best Extreme Rules matches that we’ve seen in years, however, and in front of a Philadelphia crowd, no less.

This match was violent but made sense, and utilized the creative freedom this match type allowed instead using the weapons as a crutch. Also, how the hell did Cole not break his back on the spine of that chair?


There are three Moustache Mountain//Undisputed Era matches from 2018 and every single one was tremendous. This bout, in particular, was the crown jewel of the collection.

Everything about this match was executed flawlessly. The story was excellent, the selling, especially by Trent Seven, was elite, and the fast-paced action had the live crowd going bananas from the moment the opening bell rang.

Simply put, it doesn’t get much better than this when it comes to tag team wresting.


Tommaso Ciampa and Johnny Gargano have an epic backstory from their days as a tag team ultimately ending in a dramatic breakup. That split was directly followed by a lone Gargano trying to find his way as a singles star while Ciampa recovered from a knee injury.

The moment Ciampa returned, the duo picked up right where they left off and had three absolutely brutal matches with one another over the course of the year. This showdown from TakeOver: Chicago II was some of the most dramatic, compelling television that you’ll see in professional wrestling.


Velveteen Dream may be the most fun character in WWE at the moment. Seriously, everything the guy does is entertaining. Dream’s eccentric personality mixed with the evil and solemn Tommaso Ciampa is the kind of oddball clash of styles that we love to see in professional wrestling.

Throw in the NXT Championship and you’ve got the recipe for an exciting TakeOver matchup that left fans wanting more of the two in 2019.


Sometimes simply punching and kicking one another in the face is all you to do to win the crowd over. Aleister Black and Johnny Gargano didn’t really do anything flashy in this match from TakeOver: WarGames II, they just beat the holy hell out of each other, and we absolutely loved it.

Spoiler alert: Gargano foolishly tried to go blow-for-blow with Black, one of the best strikers in the game, and in the end he had to pay for his sins. Sure, it’s an uncomplicated narrative that’s easy to follow, but goodness gracious did we enjoy watching it all unfold.

EC3 vs. Adam Cole vs. Killian Dain vs. Velveteen Dream vs. Ricochet vs. Lars Sullivan


Much like the hardcore match, it’s impossible to show the fans something they haven’t seen in the confines of a ladder match. Or so we thought. WWE somehow managed to shine a spotlight on six guys, all with completely different styles, all at once, in one match.

Like we said, everyone got their time in the sun, but Ricochet in particular came away from this match looking like a million bucks. In fact, the momentum that he gained from this one performance alone carried him for the rest of the year and into 2019.


Any other year, this would grab the match of the year spot, but the intense competition in 2018 slid it back a few spots. We’ve already highlighted the Tommaso Ciampa//Johnny Gargano rivalry, but this was the very best of the feud.

The New Orleans crowd was rabid for this match and were one hundred percent behind Gargano. Along with Ciampa, Gargano not only stole the show, but WrestleMania weekend as a whole.


You probably won’t find this match this high on any other lists but we absolutely adored it. It’s a well-known fact that Undisputed Era is fantastic, but both Danny Burch and Oney Lorcan are criminally underrated. In fact, the Chicag crowd was almost silent when the duo made their way to the ring.


This match is not only our favorite WWE match of 2018, one of our top 5 WWE matches of all time. Andrade “Cien” Almas and Johnny Gargano put on one hell of a show at TakeOver: Philadelphia with the NXT Championship on the line. Fans were very much in Gargano’s corner but couldn’t deny that the talented Almas also deserved respect.

Even if you’ve seen this bout before, go back and watch it again and pay attention to the folks in the crowd that are visible on camera. You’ll see just about every emotion imaginable displayed by the people in attendance, especially at the very end, when their hero fails to capture the ultimate prize.