The 10 Best WWE Cruiserweight Matches of 2018 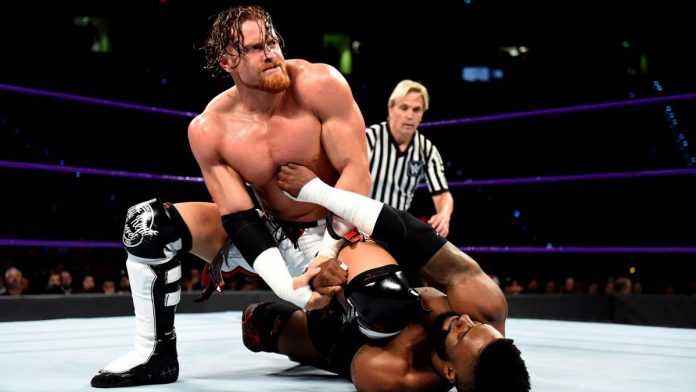 
Get used to reading Mustafa Ali’s name because he is all over this list.

This particular match features Ali facing off against one of the best strikers in the history of professional wrestling, and well, Ali can attest to how good Hideo Itami’s strikes truly are.

Ali and Itami had some notable run-ins with one another in 2018, but this bout in particular is our favorite of the group because it was the smoothest, most well-executed of them all.


Before Lucha House Rules were a thing on Monday Night Raw, the Lucha House Party helped to successfully introduce the tornado tag team concept to 205 Live.

Buddy Murphy and Tony Nese were the perfect foes for LHP to face off against, as both Murphy and Nese are bigger and more powerful than any member of LHP, but also have no trouble at all flying around the ring.

Much like Mustafa Ali, be prepared to read Buddy Murphy’s name often, because this list is pretty much an homage to his greatness in 2018.


We told you Mustafa Ali and Buddy Murphy were all over this thing, didn’t we?

In all seriousness, Ali and Murphy had a trilogy of matches in 2018 that were the best WWE had to offer for the year. Spoiler alert, all three matches made this list.

This particular showdown was the final match of the three, and although spectacular, it’s not the best the two had to offer.

Kalisto vs. Buddy Murphy vs. TJP vs. Akira Tozawa


Matches like this one are perfect examples of how to make championship titles feel important in professional wrestling. These four men pulled out all the stops just for an opportunity at the Cruiserweight Championship… it really is that simple.

Everyone had their time in the spotlight, including TJP, who reminded folks precisely how good he is in the ring. Kalisto and Akira Tozawa also had some fantastic interactions with each other during the bout.

Buddy Murphy was also here, and at this point, we don’t have to tell you what that means…


One of the highlights of the WWE cruiserweight division in 2018 was the tournament held at the beginning of the year for the vacant Cruiserweight Championship.

The event was jam-packed with memorable matches, including this one between Cedric Alexander and Roderick Strong. Both Alexander and Strong specialize in breaking backs, so it only made sense that this match was filled with each of these two doing their best to cripple the other.


Surprise! More of Buddy Murphy, this time against Cedric Alexander.

The highlights of Alexander’s run as Cruiserweight Champion were his matchups against Murphy. Both men are two of the bigger, more explosive members of the division, and watching them tear into one another never disappoints.

Seeing Buddy Murphy, someone who hadn’t been on WWE TV in any capacity for some time, capture the Cruiserweight Championship in his hometown at a stadium show was a top 5 moment for us in 2018.


Kalisto, along with the rest of the Lucha House Party, is one of the more underappreciated acts in WWE. The kids love the gimmick because it’s colorful and fun, but all three guys can also really go in the ring.

In this particular match, the size difference between Buddy Murphy and Kalisto allowed for the two to do some truly exciting things with one another, most of which involving Murphy throwing Kalisto around as if he were a .

Kalisto made everything Murphy did to him look like death; the selling in this match was fantastic.


Much like the Kalisto match listed prior, Mustafa Ali’s selling, combined with Buddy Murphy’s powerful offense, was a wonderful mix that produced some tremendous moments.

We’ve already mentioned how good Ali versus Murphy was in 2018, and this first encounter was a great way to get the rivalry going and showcase what these two could do together given the opportunity.


Another Cedric Alexander//Buddy Murphy match… this one took place in Alexander’s home state of North Carolina with his family at ringside.

Murphy was the ultimate bad guy looking to play spoiler and ruin Alexander’s run as champion in front of his friends and family, which is a very simple storyline to understand but still fun nonetheless.

Alexander has great chemistry with Murphy (who doesn’t?) and the two produce excellent matches whenever called upon. We’d love to see the duo lock horns again in 2019.


The second match from the Ali//Murphy trilogy is not only the best cruiserweight match of 2018 but one of the best WWE matches of the year, regardless of brand.

Ali and Murphy, under No Disqualification rules, absolutely tore the house down and had folks talking about this classic for days after (which is a long time in today’s society).

This match is high on so many “best of WWE” lists, and rightfully because it showcases the spectacular brand that was 205 Live in 2018. The tournament for the vacant title got folks interested in the show, but Ali versus Murphy made the cruiserweights must-see TV.