The 10 Best Vader Matches on the WWE Network 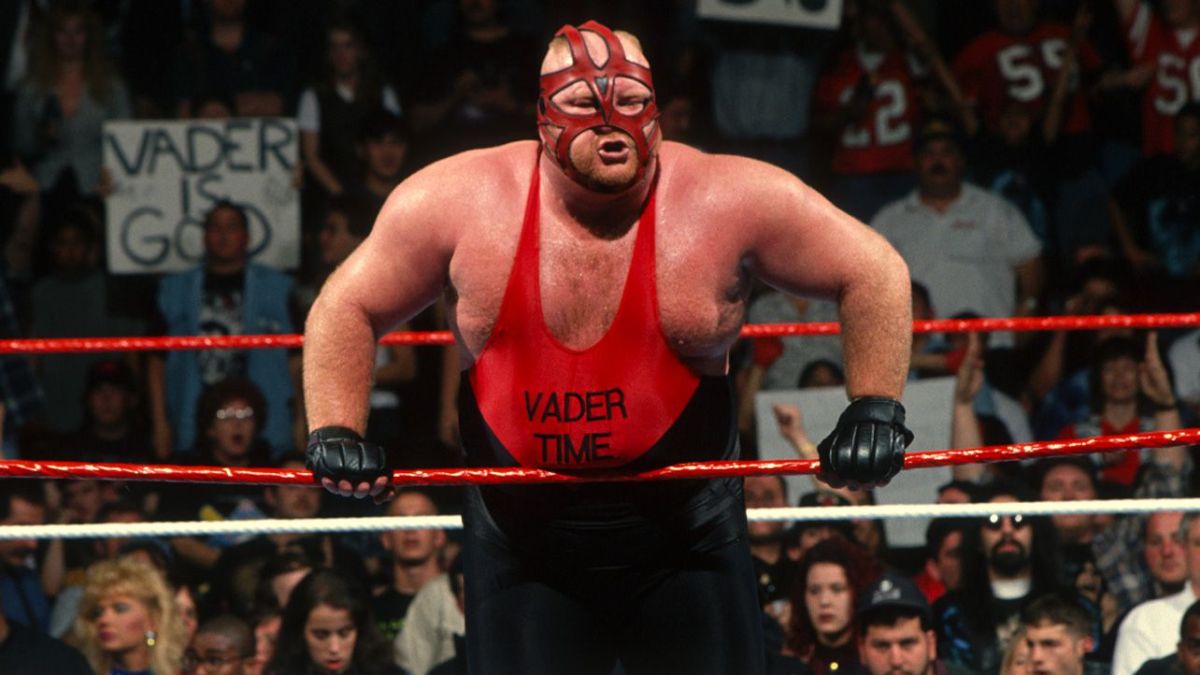 
Vader vs. The Guardian Angel vs. Sting

If you’re unfamiliar with the triangle elimination concept, it’s essentially like a three-man gauntlet match, which is a neat idea that we’d love to see make a comeback one day.

A coin flip determined that Vader and The Guardian Angel would start things off, with the winner facing Sting in the second round immediately after. The Vader//Guardian Angel stuff wasn’t bad, but things really pick up when Sting and Vader get going in round two.

Speaking of Sting and Vader, get used to hearing their names together, because this list includes a few classics between the two.

If you’re looking to see just how good Vader’s selling is, especially as a big man, this match showcases his abilities in that department beautifully.

Vader gave Dustin Rhodes, who was far from a big star at this point, so much in this match. It’s always fun to watch a young guy have a big, breakout moment, and this was one of those moments for Rhodes.

This was a fun, really aggressive match that felt like a real fight… because it kind of was. Two mammoth-sized men beat the absolute piss out of each other, which will always work in wrestling and translates well to an audience regardless of the era or crowd.

Spoiler alert: The finish kind of sucked, but that didn’t discredit the 15 minutes that occurred before the final bell.

More great wrestling, courtesy of Vader and Sting. Make no mistake about it, Vader gets his stuff in and gives Sting a beating for most of this match, but also sells his ass off and truly does his best to make Sting look good.

Vader balances “dominating big man” and “I can bump and sell” almost perfectly.

Vader and Shawn Michaels do a wonderful job of telling the classic “David and Goliath” story, popular in pro wrestling. Michaels does a good job of using his speed and agility to his advantage to avoid Vader, who obviously has the size and strength advantage on his side.

Jim Ross also does a great job on commentary pointing out the minor details of the match, helping the viewer better understand the story they are working to tell.

Strap matches can be really dumb. The concept is silly, even for pro wrestling, and it really limits what the performers can do move-wise in a match.

However, strap matches can also be really awesome. Especially when one guy is twice the size of the other guy, so it makes sense that he would want to keep the smaller guy close to him. Plus they’re always violent, and violence solves everything.

Vader vs. Stone Cold Steve Austin vs. Bret Hart vs. The Undertaker

This fatal 4-way match for the vacant WWF Championship from February of 1997 is arguably the best 4-way bout in the history of WWE. Multiple storylines and rivalries were woven together to create an epic build, which was somewhat thrown together thanks to Shawn Michaels’ lost smile.

The hype leading up to this match was intense, and thanks to all four performers turning in some of the best work of their careers, they managed to surpass it.

The “Vader beats people up” theme littered throughout this article is getting a bit redundant. However, we can’t talk about this match without mentioning the brutal first half beatdown that Vader put on Ric Flair.

Flair gets his revenge, and it helps tell one hell of a story, but things looked grim for The Nature Boy for a good bit of this bout. This may be the greatest comeback in the history of sports.

The Sting//Vader rivalry is one of the best in the history of WCW, of which this match is the crown jewel.

Watching Sting and Vader wrestle each other is both uncomfortable, because of the violence, and soothing, because it’s so easy to understand what story is being told.

They don’t really do anything out of the ordinary here, but the right notes hit in the right order, and that’s all you need sometimes.

This match is one that is hard to watch in 2018, where we know more about CTE than ever before and are continuing to increase that knowledge each and every day. It can be a struggle to enjoy matches that are this violent, knowing what we know now, but it also feels like a disservice to the stars of the past if we don’t keep their work alive by watching and talking about it.

On paper, if you know Cactus Jack and Vader, you know what you’re going to get here. Add the Texas Death Match stipulation, and you’ve got the makings of an excellent main event.