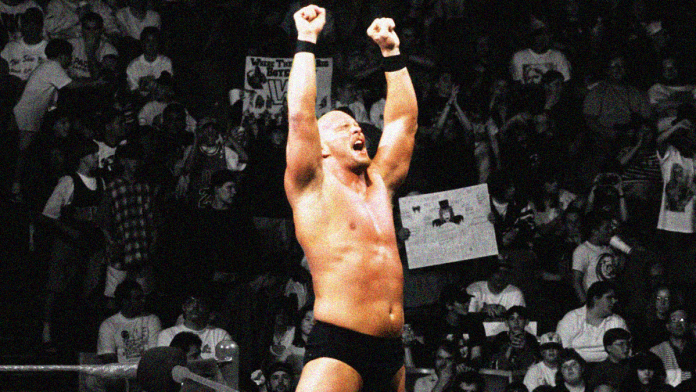 This match was Stone Cold’s in-ring swan song and one of our favorite bouts in the history of WrestleMania. Austin was forced to hang up his boots back in 2003, and The Rock was the perfect antagonist for The Rattlesnake’s last dance. These two paid homage to their legendary showdowns from years past, all while telling a tremendous new story in the process.

Steve Austin vs. Bret Hart vs. Vader vs. The Undertaker

In Your House 13: Final Four

A legendary fatal 4-way match that helped set the stage for WrestleMania 13 while being a gem of a bout on its own. Stone Cold and Bret Hart were set to do battle at the biggest show of the year in 1997 (more on that later), and this match helped further the story between the two. While storyline advancement was the main priority, the action here is some of the best WWE has to offer.

Backlash: In Your House

One of three Stone Cold vs. The Rock matches on this list, and probably the most underrated bout between the two megastars. Everyone talks about the retirement match at WrestleMania 19, or the classic main event from WrestleMania 17, but this match is often left out of the conversation. We’re not quite sure why, as the “No Holds Barred” stipulation gave these two the creative freedom needed to put on one hell of a performance.

Kurt Angle set the wrestling world on fire in 2001 by having fantastic match after fantastic match with some of the biggest names in the history of WWE. This bout with Austin from SummerSlam 2001 is one of those matches, and proof that when wrestling is good, it’s really damn good. It’s a true shame that this didn’t close the show because nothing on the card came close to touching this performance.

The first and only match on the list that isn’t from a pay-per-view event. Seeing Stone Cold wrestle for the WWE Championship on free TV was a rare treat back in 2001, so this had a big-fight feel prior to the opening bell. Chris Benoit was slowly becoming a major player in WWE around this time, and this performance proved to any doubters in the back that he belonged in the main event picture.

The forgotten Bret Hart//Steve Austin match that isn’t quite as good as the WrestleMania 13 bout, but is still pretty damn badass nonetheless. Austin and Hart had amazing chemistry with one another, as well as true respect for each other’s abilities in the ring, which allowed the two to craft some of the best professional wrestling matches of all time.

Quite possibly the biggest and most grand main event in the history of WrestleMania. This match showcased the best of the WWE’s legendary “Attitude Era” while putting the final nail in the coffin to that Era at the same time. WrestleMania 17 was the perfect pay-per-view event, and this solidified that fact as it was the perfect way to end the show.

Over the Edge: In Your House

Austin and Foley are two of our favorite WWE Superstars of all time, so it’s no surprise that a match between them made the list. These two are some of the better brawlers in the history of WWE, so the “Falls Count Anywhere” stipulation suits them perfectly.

There isn’t a match on this list that is more brutal (or bloody) than this one. Watching Triple H and Stone Cold beat this hell out of each other for almost 40 minutes in a variety of match types is too good on paper not to be great television in real life.

The greatest professional wrestling match of all time and a true “WrestleMania moment” all in one… What else needs to be said? We could go on for hours about psychology, double-turns, and the iconic shot of Austin bleeding in the Sharpshooter, but it just wouldn’t be enough.