The 10 Best Rey Mysterio Matches on the WWE Network 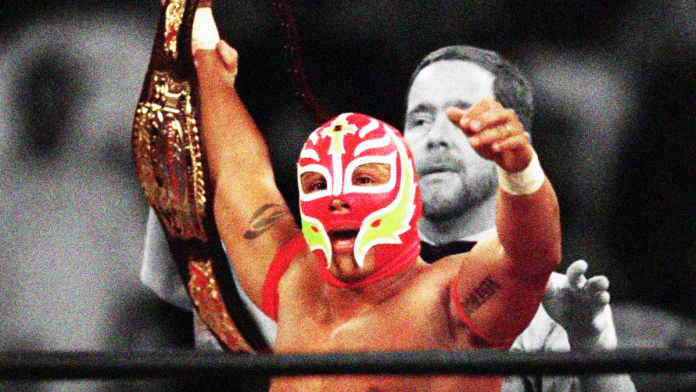 Mysterio is one of the SmackDown Six, so it’s only fitting that our first match comes under the blue banner. He was on his way out for a suspension (oops), but he wasn’t going down without a fight. Mysterio and Morrison threw down in a high-speed, action-packed title match and hugged it out at the end to prove they were still buddies.

Mysterio and Kidman pulled out all of the stops for this episode of Nitro, having a pay-per-view quality championship match on television. This is the match where Rey begins his fourth cruiserweight title reign, which is even more impressive when you consider he was only 24 at the time.

Out of all the Mysterio/Malenko matches (and there are quite a few), this is the best one. From Rey’s very first match on WCW to his first run as Cruiserweight Champ, Dean Malenko was there to knock him down while making him a star at the same time.

Add up the elite talent of Angle and Mysterio, the knowledge that Angle would be leaving SmackDown for ECW, a recently crowned World Heavyweight(ish) Champion in Mysterio, a hot crowd, and Paul Heyman on commentary, and you have a 141 2/3 chance of having one hell of a match.

This was the culmination of a two-month long battle between these two, and the third and final pay-per-view match of their feud. And with nearly 40 years of professional wrestling experience between Jericho and Mysterio at the time of this bout, it’s no surprise that it was fantastic.

If you ever want a chuckle, google “J-Crown Championship” and the first image you will see is Ultimate Dragon holding no less than eight title belts. Yep, the J-Crown Champion had to carry all eight of them to the ring for his match. Dragon got in most of the offense in this one, but if you need an example of Rey’s selling expertise, this is the one for you.

Two Out of Three Falls Match

These two squeezed a match with a 1-hour time limit into 15 minutes and you can feel it. It is non-stop high-flying action from start to finish. The match even spills out of the arena and into the parking lot, where Mysterio leaps from the hood of a car and hits his hurricanrana on Guerrera, throwing both of them to the concrete.

With the lineup featured in this match, I feel like persuasion to watch is unnecessary, but I’ll give it to you anyway. This is one of the best tag matches of all time. A match of the year candidate in 2002. A brutal showdown between four of the greatest WWE has to offer.

Mysterio worked his Halloween Havoc magic for the second year in a row, but this time with much more experience and rapport with the audience. Not to mention the fact that he had more chemistry with Eddie Guerrero than anyone else on this list. Every moment is must-see for any wrestling fan.

Talk about stealing the show. This was the opening match of the ’96 edition of Bash at the Beach, yet was head and shoulders above everything else that would happen wrestling-wise on the card, including the main event. An incredible bout between two of the best luchadors to ever step foot in a WCW ring.

Did we miss any of your favorite Rey Mysterio matches? Let us know on Twitter, @TheRumbleRamble.