The 10 Best Mick Foley Matches on the WWE Network 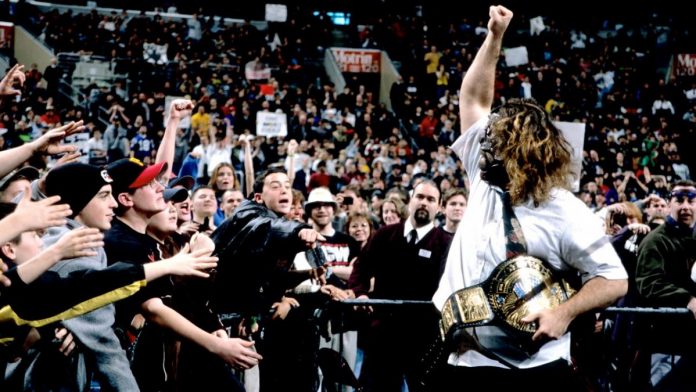 Mick Foley’s classic hardcore showdown with Edge from WrestleMania 22 is just too good not to include on this list. These two pulled out all the stops and stole the biggest show of the year back in 2006.

One could argue that this match is what took Edge to the next level. Going toe-to-toe with the Hardcore Legend gave The Rated R Superstar an edge (pun intended) that his character didn’t have prior to this bout.


Mankind vs. The Rock


This match is mostly remembered for Tony Schiavone spoiling the end result live on WCW Nitro. While an important moment in the Monday Night Wars, the match itself is actually really great, and not talked about enough for our liking.

Both Mankind and The Rock did a wonderful job telling the “ultimate underdog” story with the happy ending of Mankind overcoming all the odds and winning the ultimate prize. Also, the pop that Austin gets when he makes his run-in is an all-timer.


First of all, how good were Triple H and Mick Foley? Together, those two had great matches almost every single time they locked up.

In this particular bout (there’s more of these two to come), Cactus Jack makes his surprise debut on Raw, and he and Triple H brawl all over Madison Square Garden. Cactus’ debut, along with this match, is one of our favorite Raw moments of all time.

Side note: This entire episode of Raw is as good as it gets, and we highly recommend watching from top to bottom.


Just listen to how this match starts: Cactus Jack waits for Sting on the entrance ramp, not in the ring, and the two start punching each other immediately. Cactus and Sting then beat the holy hell out of each other all over the arena in a 10-minute sprint that’s an absolute joy to watch.

For us, that’s about as good as it gets.

Foley is probably one of the greatest brawlers of all time, but Sting (and his pretty pink tights) did a wonderful job of matching Foley’s aggression and bringing the energy needed to make this a classic.


Much like he did for Edge at WrestleMania 22, Mick Foley helped put Randy Orton on the map with this match from Backlash 2004.

It’s a Cactus Jack classic. There’s blood, barbwire and thumbtacks. Cactus throws himself on the ground harder than any other wrestler has ever done in the history of the business. It’s nothing we haven’t seen before, but damn, it’s still really fun to watch.


We’ll be honest, Mick Foley’s Dude Love persona doesn’t do much for us. But this match with Stone Cold Steve Austin from In Your House: Over the Edge 1998 is an absolute gem and one of the best matches that Austin or Foley ever had.

There’s a ton of other people (Vince McMahon, The Undertaker, The Stooges) involved in this match. Because of that, there’s a lot of stuff going on that could have ruined the whole thing, but Foley and Austin’s performances were just too good, making the match an despite the interferences.


It’s Cactus Jack and Vader in something called a “Texas Death Match,” so you know what you’re getting into.

At this point, we’re starting to remember how much stupid shit Mick Foley did during his career. It’s almost hard to enjoy these matches in hindsight, knowing what we know now about CTE and whatnot. At the same time, it feels a bit disrespectful not to enjoy Foley’s work.

It’s an interesting predicament, to say the least.

Hell in a Cell Match for the WWF Championship


This is probably the most underrated Hell in a Cell match of all time. For whatever reason, nobody talks about this match, despite the fact that it’s awesome.

The Mick Foley//Triple H feud from 2000 is one of our favorite rivalries in the history of WWE. Triple H was a total asshole and Foley was one of the most beloved Superstars roster at the time. The chemistry between the two, especially at this time, was off the charts.

Together, the two made magic, but even this classic encounter wasn’t their best match…


Mankind vs. The Undertaker


While this isn’t the best Mick Foley match on the list, it’s without a the most famous. In fact, this is probably the most well-known wrestling match of all time, regardless of the competitors.

Words don’t really do this one justice. Foley, as Mankind here, sacrificed more than anyone in the history of WWE, and completely changed the business as a result.


Our personal favorite on this list, and one of the best in the history of the Royal Rumble pay-per-view event, this match is tremendous. A hot MSG crowd, an even hotter rivalry, and the WWF Championship… we’re getting goosebumps just thinking about it.

Like he’s done for so many others, Cactus Jack brought out a side of Triple H fans had yet to see, further establishing The Game as one of the toughest SOBs in WWE.

Also, the finish to this match is one of the coolest, most-gruesome endings to a WWE match of all time. It’s good stuff.


We’ve already talked a lot about Mick Foley’s complete disregard for his own body while doing crazy, painful, and dangerous things on a regular basis to entertain the fans. While that’s true, Foley’s work as a character, on the microphone as well is in the ring, is what really makes him one of the best of all time.

When it comes to in-ring psychology, it doesn’t get much better that Mick Foley and Shawn Michales. Together, these two created something that we still go back and watch regularly over 20 years later.

Sure, this match has some of those crazy bumps and hardcore moments. But the pacing, as well as the story that is being told, is what makes it one of the best matches in the history of WWE.


What are your favorite Mick Foley matches? Let us know on Twitter, @TheRumbleRamble.