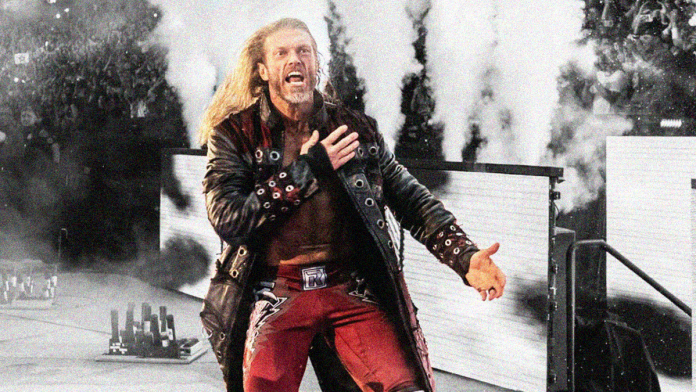 ** These do not include Edge & Christian matches, as they deserve a list all their own. This is just Edge. Being awesome. By himself. **

Gotta love pay-per-view quality matches on television. And Ric Flair’s 57-year-old ass throwing down in a TLC match with the WWE Champion. This match was so good (and so strange), that Flair mentioned it in his hall of fame speech (and made Edge cry like a baby).

Edge and Jeff Hardy are two of the kings of the ladder match, and WWE gave them the main event of the show, so it’s no surprise they pulled out all the stops and made this bout 180% worth a watch.

Edge was in quite a few brutal matches in his career, but this one might take the top spot. It’s well known that if you put Mick Foley in a hardcore match, you’re about to see some wild stuff, and Edge is no stranger to pain either. Put them together, at WrestleMania, no less, and you get 15 minutes of absolute gore.

This feud was a straight shoot. Edge really did steal Matt Hardy’s girl, Lita. They really did hate each other. And the level of realism makes it almost uncomfortable to watch but in the best way. Things came to a head in the most fitting manner possible — an ultra-violent match in a steel cage.

This one gets off to a slow start, for sure, but not every bout can be hot at the jump, and with as long a match as this is, I’m not mad at them for building up to the more intense action. The entire match is worth a watch, but the ending sequence is what really makes it impressive.

Thirty minutes of last man standing awesomeness between two of the biggest names of the 2000’s, jam-packed with high-impact spots and near falls, leading up to a final series of moves that had everyone on the edge of their seats. What’s not to like?

Edge vs. The Undertaker

Basically a hybrid of a TLC and Hell in a Cell match, this was the beginning of the PG Era for WWE and although this means there were no blood and guts, these two still put on an excellent show. Taker is the evil overlord of The Cell and pulled Edge down to the depths along with him.

Edge vs. John Cena vs. Randy Orton vs. Shawn Michaels

Having four guys in the ring at once can be a bit of a mess – unless it’s four elite wrestlers who the crowd just can’t get enough of. Then you pretty much have nothing to worry about. Great pacing, creative spots, alliances, betrayals, everything you need for a fantastic multi-man bout.

Edge and Eddie were out to prove to each other and to everyone watching that they were two of the best in the company. And to say that they succeeded would be an understatement, as this is widely considered one of the best matches to ever occur under the SmackDown banner.

This one was middle of the card, no titles on the line, just two dudes fighting over who gets to keep their hair (Edge clearly had much more to lose here, let’s be honest). Angle brings out the best in anyone he steps in the ring with, and Edge is already fantastic, so these two blew the roof off the Gaylord Entertainment Center.