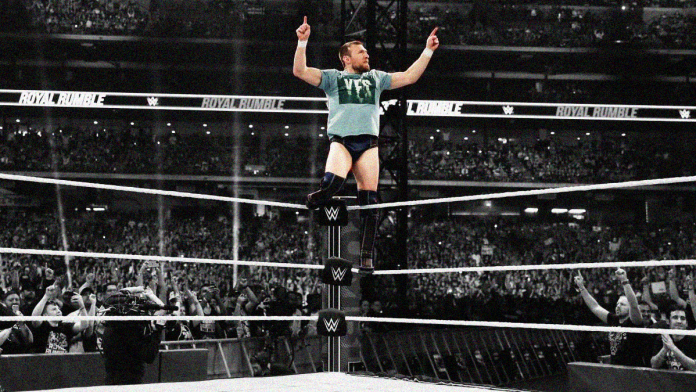 Daniel Bryan vs. Bad News Barrett (c) vs. Dolph Ziggler vs. Dean Ambrose vs. Luke Harper vs. Stardust vs. R-Truth

Multi-man ladder matches at WrestleMania are always entertaining, but this one, in particular, might be the best of the bunch.

Bryan, along with six other talented individuals, kicked off WrestleMania 31 with a bang. Broken ladders, huge high spots, and even some comedy, made this match as close to perfect as humanly possible.

Also, watching Bryan win the Intercontiental Championship for the first (and currently only) time was a pretty special moment, too.


Daniel Bryan vs. Cesaro sounds amazing on paper so it’s no surprise that a match between the two made the list.

Bryan and Cesaro tore the house down on this episode of Raw from July 2013. Bryan actually had three matches back-to-back-to-back on this show, with this match being the second (and best) of the trio.


How hot was Daniel Bryan in the summer of 2013? This is one of THREE matches from June/July 2013 on this list.

This particular match with Seth Rollins was tremendous. Both Bryan and Rollins did a good job of mixing in some fun high-flying action with some good ‘ fashioned physicality.

Seriously, look at the gif above and tell me that watching Daniel Bryan beat up Shield Seth Rollins doesn’t sound fun?


Watching Daniel Bryan open and close WrestleMania 30 with two absolutely spectacular matches, both of which made this list’s top 5, is one of the greatest moments in the history of WWE.

This was the first of the two; Bryan kicked off the show with this match against Triple H, which was a joy to watch. Bryan and HHH did a great job of telling a fun story that was both compelling and easy to understand.

The outcome was predictable, but that didn’t matter, fans played along and everyone had a great time in the process.


Daniel Bryan was very vocal about his dream match being against Brock Lesnar. To see him finally get his wish last year was a very special moment, to say the least.

We’ll be honest, they completely got us with this one. At first, it looked as though Bryan was going to be squashed by Lesnar in dominating fashion. While Bryan did indeed take a hellish beating from Lesnar, he managed to dish out plenty of punishment of his own too.


This was the match that, in our eyes, confirmed that Roman Reigns had what it took to be a major singles star in WWE. Watching Reigns give Daniel Bryan everything he could handle was exactly what The Big Dog needed before his match with Brock Lesnar at WrestleMania 31.

Now that both Bryan and Reigns are both back in WWE and healthy, we hope this two lock horns again in the very near future.


This match is probably our favorite WrestleMania main event of all time.

Bryan overcoming the odds and beating Triple H, then Batista and Randy Orton on the same show night one of the best stories that WWE has ever told. Watching Bryan celebrate with the titles, with the pyro and the confetti surrounding him as the show goes off the air is as good as it gets.


The final match from the Summer of ’13 on this list, this is one of the best matches John Cena or Daniel Bryan ever had.

Watching Bryan and Cena slap one another over and over again (as seen in the gif above) is the kind of professional wrestling that we love. Also, isn’t it crazy to think that these two were almost brother-in-laws?


Arguably the best WWE match of 2012 and one of the best matches of Bryan’s career so far, Bryan and Punk spearheaded the change in WWE’s hiring process, where “indy guys” are now all the rage.

As for this match, Bryan and Punk pulled out all the stops and told an incredible, action-packed story. In our opinion, everything about this match, from the opening to the creative finish, was near perfect.


Our favorite Daniel Bryan match yet and the best WWE match of 2018.

Bryan and AJ Styles had a unique match that is rarely seen in today’s WWE. The two focused on strikes and mat wrestling, which can bore a crowd if not done properly, which wasn’t the case here.

Sure this match just happened, but go back and rewatch it sometime soon, because it’s an absolute masterclass on technical wrestling.


What are your favorite Daniel Bryan matches? Let us know on Twitter, @TheRumbleRamble.