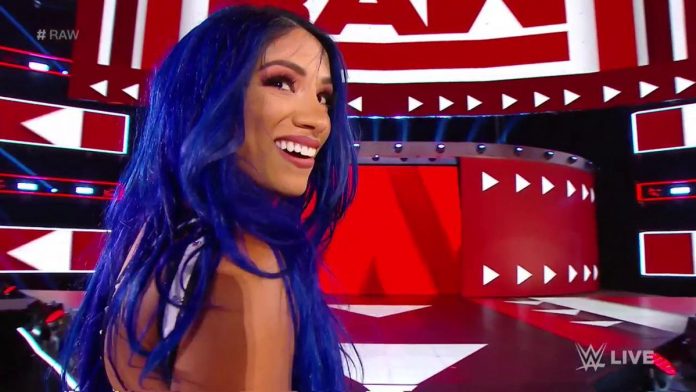 Last night on Raw, Natalya made her entrance in front of her hometown crowd to express her disappointment that Becky Lynch had proven herself the better woman at Summerslam and announce that she had “suffered a dislocated elbow” due to the Dis-Arm-Her.

But no matter how upset she was, she knew that her father was looking down on her with pride, knowing that she tried her best. The Queen of Harts became tearful as she informed the WWE Universe that it was actually the one-year anniversary of her father’s death.

As Natalya began to lose her composure in the ring, music rang through the arena, signaling the return of none other than Sasha Banks, who hasn’t been seen on WWE programming since WrestleMania 35 earlier this year.

The Boss approached Natalya, appearing to comfort the “injured” Superstar but after a moment’s embrace, viciously attacked her, literally throwing off her classic Sasha Banks look to reveal she had an entirely new appearance to go along with her new, unsympathetic attitude.

Although Becky Lynch and Natalya have been at odds for weeks now, The Man couldn’t stand by and watch a fellow woman suffer, so she sprinted toward the ring in an attempt to save her.

Unfortunately for Lynch, not only did she fail to protect Natalya, but she also ran straight into a beat down at the hands of Banks.


Sasha Banks ruthlessly, repeatedly struck The Man with a steel chair until she felt that she had gotten the message across that The Boss was back and ready to resume her place on the throne.

This interaction will undoubtedly lead to a rivalry between Banks and Lynch in the near future, and though The Man has been dominating the Women’s Division for quite some time, she may have finally met her match.


What do you think of Sasha Banks’ Return? Let us know on Twitter, @TheRumbleRamble.