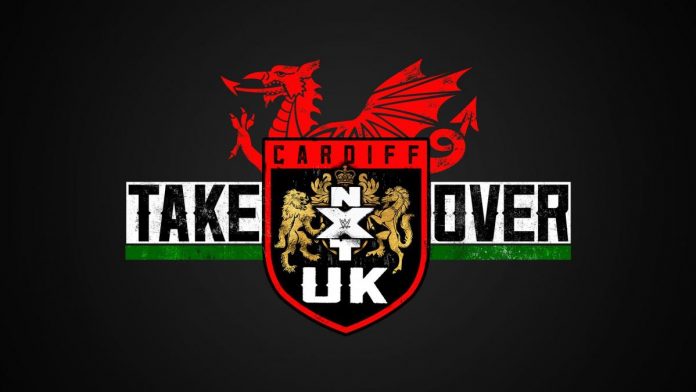 NXT UK TakeOver: Cardiff, out of the Motorpoint Arena in Cardiff, Wales, just wrapped up. We’ve got the match results, as well as our overall thoughts on the show, for you to check out below.


Kicking off NXT TakeOver Cardiff, Noam Dar and Travis Banks made it perfectly clear that they did not respect each other whatsoever. And after several moments of struggling for supremacy, Travis Banks thought he had gained the upper hand by throwing Dar out of the ring.

But Noam Dar was luring him into a false sense of security, responding with a ferocity that brought him extremely close to victory.

Travis Banks eventually fought Dar off, climbing to the top rope for an aerial attack, but Dar rolled out of the way, regaining his footing just in time to overpower Banks on the mat. When Dar failed to lock in his submission, Banks sank in one of his own, which Dar escaped.

Dar hooked Banks in near fall after near fall, Banks resisting defeat each and every time. Banks hit his Slice of Heaven by launching himself backward from the barricade, then connected with a double stomp back in the ring, but Noam Dar proved to be just as determined as Banks and kicked out of the pin.

Soon after narrowly avoiding defeat, Noam Dar flung himself at Banks, hit his Nova Roller finisher, and left with a win under his belt.


Coming to the ring to answer Cesaro’s open challenge, Ilja Dragunov welcomed the Swiss Cyborg to join him. Knowing that he was probably outmatched and definitely at a size disadvantage, Dragunov charged toward Cesaro the second the bell rang, attempting to rock his opponent early and therefore gain control.

But Cesaro was basically unfazed by this ambush, overwhelming Ilja with ease in the ring before hoisting him above his head and tossing him to the outside. From here, Cesaro rag-dolled Dragunov handily, Dragunov clearly unable to fight off an opponent with such a marked strength advantage.

After disorienting Ilja in one of the longest swings we’ve ever seen, Cesaro followed up with a submission attempt, and it was here that Dragunov began to pick up steam. With multiple strikes and dives from Ilja, Cesaro finally looked slightly less dominant.

Cesaro, of course, came back with a vicious string of strikes and attacks, and appeared to have taken the victory multiple times, but Ilja Dragunov persevered through every pinning attempt.

Dragunov came close to his Tornado Moscow finisher, but Cesaro caught him with a mid-air uppercut, keeping Ilja down for good.

Post-match, Cesaro seemed to be considering beating Ilja Dragunov down some more, but embraced him instead, giving him the Swiss Superman stamp of approval.


The tag champs, Zack Gibson and James Drake, kicked off the match against Mark Andrews and Flash Morgan Webster, and obviously did not take their challengers seriously, which came back to haunt them almost instantly, as Andrews and Webster held dominion over the opposing teams for a solid amount of time in the first half of the match.

Realizing that they needed to rethink their strategy, Gibson and Drake renewed their efforts against Andrews and Webster, but quickly singling out Webster, with a much more serious, and ruthless, approach.

After receiving a savage beatdown from Gibson and Drake, Webster tagged out, giving the ring to his partner, Mark Andrews, who flew into the match at full speed, taking all four of his competitors out of the ring before working with Webster to dive onto them in turn.

Andrews and Webster fought valiantly, gaining near falls against both Gallus and the Grizzled Young Veterans, but couldn’t quite put their opponents away. With a Helter Skelter on Mark Andrews, the champs thought for sure they had retained, but Andrews persisted.

Gallus took the ring from the Grizzled Young Vets, wearing down Andrews themselves before throwing him out onto the remaining three men and diving onto all four of them. Wolfgang and Mark Coffey may have taken the win here, but they got a little too confident, enabling Flash Morgan Webster to break their hold over him and his teammate.

A brawl broke out between all 6 competitors, after which Gallus and the Vets focused solely on each other, once again overlooking Andrews and Webster, which gave them enough time to regain their strength.

Gibson and Drake connected with their Ticket to Mayhem on Webster, but instead of taking the win while it was in their grasp, Drake threw himself out of the ring onto Gallus to prevent any interference, leaving Gibson vulnerable.


Leaning into the Last Man Standing stipulation, this match had a hot start, Joe Coffey being met halfway down the ramp by a stampeding Dave Mastiff. And shortly after the match began, Dave Mastiff was granted an unexpected weapon.

As the weight of both competitors hit the ropes, the top rope collapsed, which Mastiff took as the perfect opportunity to use the turnbuckle in the most barbaric ways he could think of, bashing Coffey’s teeth in with it before doing his best to shove it up Joe’s nose.

With the ring in shambles, the action quickly spilled to the outside, where many more weapons awaited them. Using everything in his vast arsenal from a pool stick to a cricket bat to a steel chain, Dave Mastiff destroyed Joe Coffey.

And even though Coffey got some attacks in of his own, such as using the pool stick to beat down Mastiff and even putting him through a table, his will to remain standing was the only thing that kept him up, as his body was visibly fighting against this decision.

From ringside, Coffey and Mastiff fought into the crowd, each armed with a steel chair, Dave Mastiff so confident in his ability to bring Mastiff down that he actually gave Coffey the second chair he had been holding.

The two made their way to the announce table, and after Mastiff flung Coffey into it chest-first, they climbed to the top of a platform behind it, exchanging strikes until a headbutt from Mastiff sent them both crashing through the tables below it.

Coffey and Mastiff each fought to regain their footing, but Coffey made it to his feet a second quicker, allowing him to shove Mastiff back to the ground in the final count, giving Joe Coffey the win.


As Kay Lee Ray has taken the low road in this feud, mocking Toni Storm for her the trials she has faced in her life, Toni Storm came into this match much more emotional than she really should have, which would ultimately be her downfall.

Toni Storm sobbed in the ring as Kay Lee Ray gained control, adding injury to insult. And though Toni came back with a sunset driver and a Storm Zero, Kay Lee Ray overcame every attack and pin Toni Storm could throw at her.

After enduring two near falls at the hands of Storm, Ray hurled herself from the top rope onto Toni Storm on the floor, hitting her third Widows Peak of the match back in the ring and becoming the new NXT Women’s Champion.


Cesaro certainly had the size and strength advantage over Ilja Dragunov, but the contrast between those competitors was nothing compared to that between Tyler Bate and WALTER.

That being said, being a big strong boi has its advantages, and Tyler Bate actually managed to lift WALTER using both his arms and legs multiple times throughout the match.

This astonishing show of strength took WALTER by surprise, allowing Tyler Bate to put up even more of a fight than he maybe would have otherwise. Once WALTER had gotten over the shock, however, he took full control, tossing Bate around effortlessly until he was forced to relent while Bate was examined by officials after being thrown head-first into the ring post.

True to form, WALTER kept his composure no matter how many times Tyler Bate overcame his attempts to finish him. Instead of losing his cool, he simply doubled down on his efforts, growing increasingly more ferocious in his attacks. WALTER held Bate in a lengthy, and rather disgusting, Boston crab, but still, Bate refused to give in.

With a shooting star press, Tyler Bate gained a near fall against the champ, and when WALTER powered out of the pin, Bate attempted to set up the Tyler Driver, but WALTER’s immense strength enabled him to toss Bate off without difficulty.

On the top rope, Bate did his damndest to lift WALTER out of the ring with a suplex, but WALTER again shoved him away, or rather, chopped him so hard he flew to the mat. WALTER remained perched on the ropes, and Bate charged at him, this time successfully sending the champ soaring to the mat with a suplex.

In another stunning feat, Tyler Bate lifted WALTER for the airplane spin, following it up with a Burning Hammer, but the energy expenditure required to hold the behemoth of NXT UK in the air for such an extended period of time prevented Tyler Bate from making the pin.

With a Tyler Driver 97, Bate pinned the champ once again, hitting a corkscrew senton when WALTER didn’t stay down, but WALTER would not be defeated.

A series of enormous strikes from WALTER wore away at Bate, who didn’t give up, but with a suplex on the apron, a splash from the top rope, a powerbomb, a chop, and an absolutely devastating clothesline all in quick succession, WALTER retained his NXT UK Championship, though obviously worse for wear after this fierce competition.

To cap off an excellent match and an outstanding NXT TakeOver Cardiff overall, Trent Seven and Pete Dunne came to comfort their Moustache Mountain brother in the ring, helping him to his feet as the crowd cheered the heroic almost-champion.


What did you think of NXT UK TakeOver: Cardiff? Let us know on Twitter, @TheRumbleRamble.