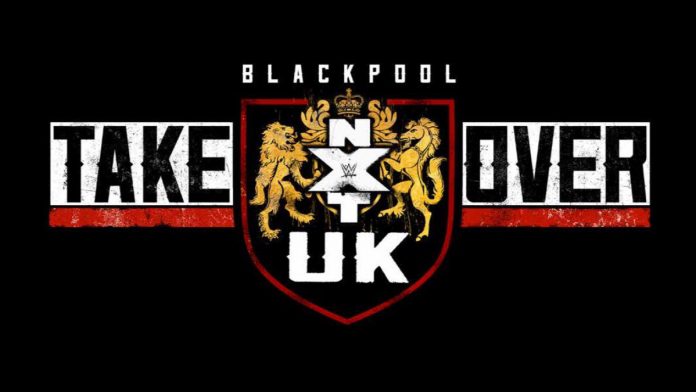 Bate and Seven were running circles around their opponents, even doing a bit of taunting here and there, when Drake and Gibson cut them off, working together to brutalize Trent Seven while keeping him as far from his corner as possible.

At one point, James Drake smashed into the back of Seven’s head with a wicked forearm, busting him open. After several minutes of punishment, Seven made it within reach of his partner, and Bate got the hot tag.

Wasting no time in gaining retribution for his friend, Bate took both Drake and Gibson on at once, appearing to care very little regarding which man was his official opponent in the moment.

Bate and Seven were closing in on the victory, but their opponents were not going down without a fight, breaking up every pinfall attempted by the Bois. Gibson and Drake had Moustache Mountain locked in matching armbars when Tyler Bate escaped by hoisting James Drake above his head and tossing him into Gibson, breaking Gibson’s hold on Seven in the process.

With the NXT UK tag titles on the line, both teams were positively relentless in their quest for victory. Near fall after near fall, all four men did their best to destroy each other until finally, Drake and Gibson took out Tyler Bate with a modified Doomsday Device to the floor, then hit a tombstone facebuster on Trent Seven, becoming the first-ever NXT UK Tag Team Champions.


Long before the show began, Jordan Devlin attacked Travis Banks as he arrived to the arena. Therefore, it was only fitting that Banks assaulted Devlin during his entrance, before the bell ever rang.

Unfortunately for Banks, Jordan Devlin appeared to have been prepared for such an event and took Banks down before he could do much damage at all.

Devlin had just begun to cut a promo about how awesome he was when NXT UK General Manager, Johnny Saint, came to the stage and informed Devlin that, as he had known Devlin would behave in a less than sportsmanlike manner, he had a backup opponent for The Irish Ace.

To the delight of the audience, Finn Bálor appeared, ready to teach his protégé some manners. Devlin smacked him in the face to start things off, but it did not deter Bálor in the slightest.

Bálor put the boots to Devlin until The Irish Ace had enough and put an end to Bálor’s attacks. He laid such a beating on his former trainer that he nearly won via count-out, but Bálor wasn’t going to give up that easily.

There’s really no other way to say this; these two beat the shit out of each other. Every time it appeared one had the upper hand, the other came back with a vicious response. Bálor’s strategy was clear: get the Coup de Grâce, get the victory. Knowing Bálor as well as he does, Devlin successfully evaded the move several times. In the end, however, Bálor landed his fatal finisher, conquering his arrogant apprentice.


Out to prove he possessed the “killer instinct”, Dave Mastiff attempted to introduce stairs into the match shortly after the bell rang, but took a little too long getting them, as Dennis grabbed a kendo stick while he did, beating Mastiff down with it before he was able to inflict any punishment with the stairs.

After a few merciless kendo stick shots from Dennis, Mastiff snatched it away from him, beating him down with his own weapon. Dennis got his payback almost immediately by throwing Mastiff into the steel stairs.

Eddie Dennis showed off his impressive strength by repeatedly manhandling Mastiff with relative ease (he struggled slightly, but to be fair, Mastiff is over 300 pounds).

He thought he could continue to overpower Mastiff but was eventually brought down a few pegs after a brutal spot to the bare floor. Back in the ring, Mastiff attempted to finish him off, but Dennis somehow managed to avoid the attack.

Finally, by putting Dennis through a table in the corner of the ring with a cannon ball, Dave Mastiff took the victory.


Toni Storm was out to prove herself against the champ, but Rhea Ripley was ruthless, absolutely demolishing Storm for much of the match.

It wasn’t until Storm threw a nasty headbutt that she was able to shift the momentum slightly in her favor, and even then, Ripley was far from being taken out of action.

The two women traded submissions, attempting a different approach to victory, as neither had been able to successfully keep the other down. Toni Storm slowly but surely wore Ripley down, both with her own offense and her refusal to submit to the .

With a second headbutt followed by a Storm Zero, it looked as though we might have a new champion, but miraculously, Ripley kicked out of the pin. Storm wasn’t giving up, however, and hit yet another Storm Zero, this time keeping Ripley down and becoming the NXT UK Women’s Champion.


Pete Dunne and Joe Coffey started things off at a methodical pace, circling the ring and taking time to feel each other out before getting too deep into the action.

When the two did lock horns, Pete Dunne was quick to bring Coffey to the mat, looking to deliver some of his signature joint manipulation. Coffey shifted the momentum by slamming Dunne on the ramp, then jumped back into the ring and waited for Dunne to join him so he could resume the abuse.

Despite the intense slew of offense from Coffey, The Bruiserweight was unyielding, taking every strike to the chin and coming back for more. Dunne attempted a comeback more than once, but Coffey continued the endless stream of attacks.

Neither man able to defeat the other, they resorted to a series of headbutts until both were laid out. Dunne used this position to his advantage and did his best to bring Coffey down via submission. Although Coffey escaped, he was soon hit with Dunne’s lethal Bitter End – and to Dunne’s disbelief, Coffey kicked out.

Coffey came back with a vicious powerbomb on the apron and Dunne very nearly snagged the victory via but was unwilling to end the match in such anticlimactic fashion.

Both men appeared incapacitated after a disgusting toss from the top rope, and in a fit of desperation when neither had the energy to make the pin, they turned to firing punches at each other.

The champ landed two Bitter Ends but was too exhausted to capitalize, allowing Coffey to roll out of the ring. After taking a massive fall from the top rope to the floor, once for Dunne, twice for Coffey, it was a miracle that either able to get back to their feet at all, let alone return to the match.

The Bruiserweight hit Coffey with another Bitter End and still couldn’t keep Coffey down. He did, however, wear Coffey down just enough to tap him out after doing everything he could to break his fingers.

Post-match, Dunne was given a few moments’ before he was confronted by a new opponent – WALTER. Pete Dunne and WALTER were staring each other down in the ring when Joe Coffey tried to jump back in but was literally kicked out by NXT UK’s newest superstar. The two continued to stare each other down until Walter respectfully left the ring, allowing the reigning champ to continue the festivities.


What letter grade would you give tonight’s show? #NXTUKTakeOverBlackpool