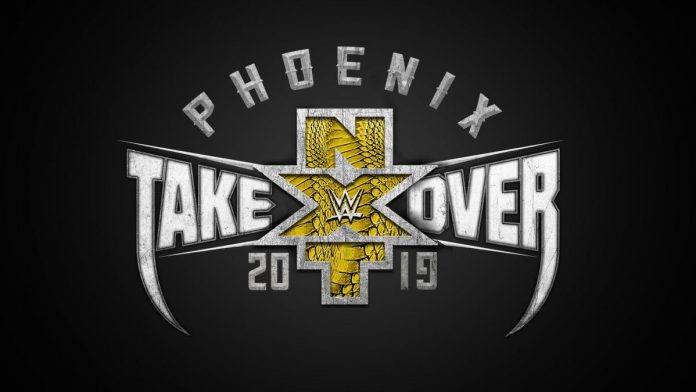 NXT TakeOver: Phoenix, out of the Talking Stick Resort Arena in Phoenix, Arizona, just wrapped up. We’ve got the match results, as well as our overall thoughts on the show, for you to check out below. Let us know what you thought about TakeOver by tweeting us, @TheRumbleRamble.


After an insane entrance from the War Raiders, including coming up through the floor, into a horde of Vikings, Hanson and Rowe wasted absolutely no time pounding Roderick Strong and Kyle O’Reilly.

Although they were unable to score a quick victory (and they did try), War Raiders did an excellent job of wearing Undisputed Era down before Roderick or O’Reilly was able to employ any of their usual devious tactics.

O’Reilly and Strong were able to take control of the match momentarily by double-teaming Hanson, but Rowe turned the tables yet again. An unsuccessful dive from Hanson led to him being out of action at ringside, and Undisputed used this to their advantage, working together to bring Rowe down while there was no threat of his partner ing.

Thanks to an attack from Strong, Hanson distracted the referee, allowing Kyle and Roderick to pummel Rowe with kicks and punches.

Hanson got his revenge by very nearly winning the match with a bronco buster on Roderick Strong, but Strong managed to kick out at the last second.

Strong and O’Reilly hung on to the tag titles for dear life, but once Hanson kicked out of their high-low combination, it became clear that they were destined for failure. With a double powerbomb followed by a leg drop, Hanson and Rowe became the new NXT Tag Team Champions. Get ready to Join the Raid.


Riddle and Ohno set the tone of the match immediately, punching each other in the face the moment the bell rang.

Ohno quickly took charge of the match, allowing very little offense from Riddle. After being grounded by Ohno, Riddle resorted to repeatedly slapping him in the face, but it did very little to help him. Ohno continued to demolish the Bro of NXT, busting his mouth open at once point with a brutal kick.

Each time Riddle attempted to take control, Ohno was there to knock him down. Ohno nearly defeated Riddle with a moonsault, and when Riddle powered out of this attack, he was finally able to shift the momentum in his favor. Riddle battered Ohno with elbows to the side of the head, causing The Knockout Artist so much pain that he was forced to tap out.


Johnny Gargano and Ricochet took their time getting into the hard-hitting action. But just watching these two mega-graceful athletes run/flip around the ring was more than enough to get us excited.

Gargano changed the tone of the match when he punched Ricochet in the face rather than accepting help up from the mat, and the pace and level of intensity skyrocketed from there.

As you would probably expect, Ricochet and Gargano used their speed and agility throughout, resulting in a high-flying match, both men so light-footed there were moments when they appeared to float through the air.

Ricochet came close to victory more than once, at one point hitting a massive flying uppercut, but Gargano was determined to capture gold and persevered.

The One and Only tossed Gargano out of the ring, dove on top of him, hit a standing shooting star press, followed it all up with a moonsault, and Gargano still refused to yield. Gargano attempted a comeback with a , but Ricochet stopped him in his tracks, then flipped out of it, landing on his feet.

Gargano caught Ricochet in a Gargano Escape, but it didn’t get him anywhere, as Ricochet got out of it then tossed Gargano into the corner. Ricochet continued to slam Gargano with the biggest moves in his arsenal, and Johnny TakeOver continued to slither his way out of a loss.

Gargano got back at Ricochet with a poison rana followed by a springboard DDT, but Ricochet proved just as resilient as Gargano and refused to admit defeat. In a fit of wild frustration, Gargano removed the padding from ringside, clearly planning to acquaint some part of Ricochet with the concrete floor, but the referee managed to talk him out of it.

Back in the ring, Ricochet caught Gargano in his own submission, the Gargano Escape. Then, to the tune of an overwhelming “fight forever” chant, Gargano hurled Ricochet into the exposed concrete with a brainbuster. After proclaiming “I win,” Gargano hit a final DDT to be sure the champ was finished. And win, he did.


Shayna Baszler tried to throw Bianca off her game early, starting things off by disrespecting the EST of NXT, but Belair would not be swayed.

When mind games didn’t work, Baszler went for Belair’s braid, using her signature hairstyle against her by yanking it, causing Belair’s head to crash into one of the ringposts. Belair nearly lost by count-out because of this, but managed to slide in the ring at the count of 9.

With Belair on her back, right where Baszler wanted her, Shayna began brutalizing the EST, giving her no room to fight back.

Baszler made the mistake of going back to taunting Bianca, which enraged her enough to give her a second wind. Belair gained a near fall with a spear, then immediately went for another pin, but was unable to defeat the Queen of Spades.

Clearly worn down, the two traded strikes until Baszler grounded Belair, but when she went for the finish, Belair whipped her with the braid.

Belair hit her K.O.D. spear and would have won had it not been for a ref bump leaving the referee laid out in the corner. While the referee was still down, Marina Shafir and Jessamyn Duke attacked Belair, allowing Baszler to lock in the Kirifuda Clutch.

Miraculously, Belair escaped the Clutch by lifting herself and Shayna off the ground. Baszler caught Belair in another Kirifuda Clutch as Baszler attempted a 450 and, despite Belair’s best attempts to escape econd time, Baszler put her to sleep, retaining her title in the process.

Damage may done, but @WWEAleister still managed to pull THIS out of his arsenal! #NXTChampionship #NXTTakeOver pic.twitter.com/pWpRbGjZuP


Aleister Black and Tommaso Ciampa, being the intense competitors they are, kicked things off with a violent lock up, gripping each other as if proving their strength would win the match then and there.

Both men stuck to striking at first, Ciampa doing his best to avoid Black’s lethal kicks. Aleister got the lead with a dive to the floor, followed by a few intense strikes in the ring while Ciampa pleaded with him to show mercy.

Ciampa shifted the momentum by zeroing in on Black’s left knee, doing everything he could to incapacitate Black by destroying the ligaments in his leg. Ciampa was so secure in his ability to defeat Black that he took a quick break, resting on the announce table with some water.

Black didn’t take the disrespect well and kicked the water from Ciampa’s mouth before the action spilled back into the ring. Gathering all of his strength, Black smashed into Ciampa with a vicious kick, knocking Ciampa from the top rope to the floor.

The two took turns attempting finishers, both avoiding the other until Black caught Ciampa with a few kicks, but they only won him a two count.

Aleister Black attempted the Black Mass, but his left leg was in too much pain to follow through with it. The champ took advantage of this moment, catching Black in a single leg crab which Black was able to escape, locking in a crab of his own.

Ciampa landed a tower of London on the apron, connecting Black’s head with the hardest part of the ring, but was still unable to conquer Black. The Psycho Killer mocked Black with the usual lead-in to the Black Mass, which Black responded to with a kick to the face of Ciampa.

The two furiously traded then , then rollups, each unable to secure the victory against the other. Black hit Ciampa with a double stomp, then a jumping knee and a moonsault to the floor, which Ciampa countered with a Fairytale Ending, and still, neither submit.

As his protege did before him, Ciampa pulled up the padding at ringside but was hit by a by Black, who followed it up with a Black Mass the moment Ciampa returned to the ring.

Ciampa somehow managed to roll to his side in the pin, keeping Black from taking the victory. The champ then hit a sick DDT followed by another Fairytale Ending, but Black kicked out.

For the third time, Ciampa hit a Fairytale but went for a fourth instead of the pin, which Black countered with a kick. Unfortunately, Black’s “injured” left knee cost him the match when he was unable to complete the Black Mass, giving Ciampa the opportunity to land his fourth Fairytale Ending, finally keeping Black on his back for a count of three.

As Ciampa celebrated on the stage, his former best friend, Johnny Gargano, joined him, newly acquired North American Championship in hand. The two “happily” brandished their titles together as the show went off the air.