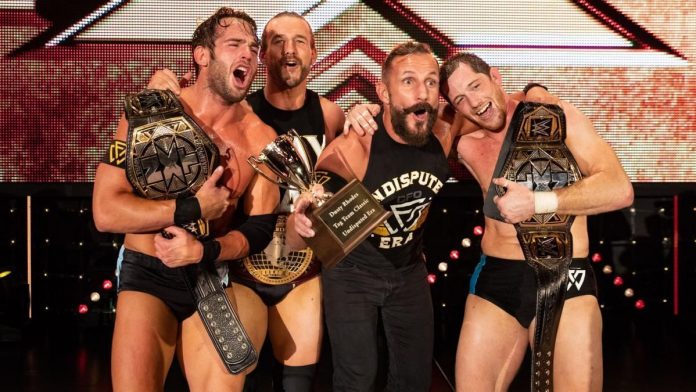 
The NXT tag division is stupid-loaded right now. Seriously, the amount of talent in this division makes it nearly impossible to just have two teams face each other at TakeOver: New York.

There are quite a few teams who deserve a shot at the War Raiders and their tag titles, but Undisputed Era, along with Danny Burch and Oney Lorcan, are at the top of that list.

As for this match, Bobby Fish and Kyle O’Reilly pick up the win and bring the NXT Tag Team Championship titles back to the Era.


With another NXT UK TakeOver event yet to be announced, the Pete Dunne//WALTER match doesn’t appear to have a spot on any major card at the moment.

Having that match on this show not only gives the event a nice shot in the arm but also showcases the NXT UK brand on a much bigger platform. It’s a win-win, in our opinion, and they could follow up with a rematch on the next NXT UK TakeOver event.

Pete Dunne’s had an impressive reign as WWE United Kingdom Champion, but everything must end eventually, and WALTER is the perfect opponent to finally dethrone The Bruiserweight.


It seems like both Keith Lee and Matt Riddle have been waiting for their breakout moment since arriving in NXT but just haven’t had the opportunity to do so. With a lot of NXT’s current main event stars showing up on Raw or SmackDown Live, it’s the perfect time to give these two a chance to shine.

A match between Lee and Riddle, with the winner earning the right to face the NXT Champion at a later date, seems TakeOver-worthy.

Riddle gets the win, but Lee’s future in NXT is still very bright.


This match seems like a no-brainer at this point.

Shayna Baszler has been on one hell of a run for quite some time now, defeating everyone that has been put in her path. Io Shirai seems like she’s earned the next shot at the NXT Women’s Champion, and the two already have a bit of a backstory with one another from NXT TV, which only makes the matchup make more sense.

Io Shirai finally knocks Baszler from atop the mountain, establishing a new era in NXT.


After watching the NXT 6 tear it up in tag team action on Halftime Heat, the idea of a 6-man Armageddon-style Hell in a Cell match for the NXT Championship popped into our heads. Also, we’ll be honest, another Tommaso Ciampa//Johnny Gargano singles match on a TakeOver pay-per-view just doesn’t do it for us.

Throwing all six of these guys, who all have intertwining storylines with each other from over the years, may be a bit lazy. But the match itself would more than likely kick ass, and getting the title on Adam Cole in the most exciting way possible is the main goal.