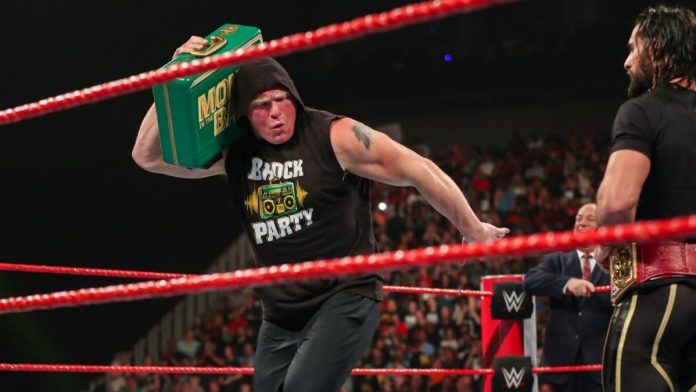 WWE is jam-packed with excellent wrestlers, and though a large part of that is athleticism and in-ring expertise, another part has always been being somewhat of an actor. Whether pretending to be someone unlike their normal selves or getting to the other side of a feud they may not be particularly interested in, being a WWE Superstar requires a great deal of commitment and skill.

But no matter how much talent you possess, or how good you are at feigning emotions, true enjoyment, or lack thereof, will almost always show through. This is especially true with Brock Lesnar, whose feelings toward what he’s been asked to do are always glaringly obvious.

And most of the time, what catches Brocks interest makes complete sense, but every now and then, he surprises us (particularly those fans who claim that The Beast has no personality).

At the Money in the Bank event last week, Brock Lesnar crashed the Men’s Ladder Match, beating out the 7 competitors who had spent nearly 20 minutes tearing themselves and each other apart, and taking the briefcase for himself. An excellent bit of strategy that set the internet ablaze with a mixture of delight and disgust.

The next night on Raw, Brock Lesnar came out with the green and gold case in hand, but instead of his usual menacing demeanor, he was grinning from ear to ear while he held the briefcase on his shoulder as if he was carrying a boombox, bobbing his head to his own music.

He had so much fun and garnered so much attention, in fact, that last night, he took it up a notch, appearing with the briefcase on his shoulder once again, but had modified it to look like an actual boombox and wore a shirt bearing the phrase “Brock Party” surrounding an image of his boombox briefcase.

Dancing across the stage to the music he chose just for the occasion while sporting an even bigger smile on his face, Brock was clearly enjoying himself, making many of us watching enjoy ourselves as well.

And whether you’re a Brock Lesnar fan or not, you can’t deny that seeing someone experience pure joy in whatever they’re doing makes for great entertainment.

What do you think of the Brock Party? Let us know on Twitter, @TheRumbleRamble.