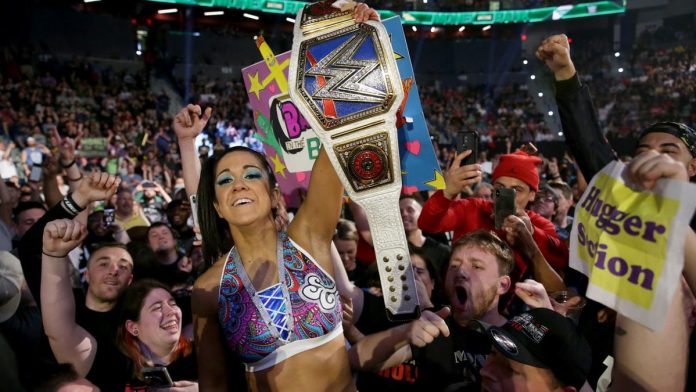 Last night’s Money in the Bank event featured some pretty big moments and matches. We got a stellar Universal Championship Match between Seth Rollins and AJ Styles, a jaw-dropping ladder match for the Men’s Money in the Bank briefcase, and Roman Reigns putting Elias in his place, just to name a few.

But perhaps the best moment of them all involved everyone’s favorite underdog, the mother of wacky waving inflatable arm-flailing tube men, the huggable one, and the now first-ever grand slam Women’s Champion, Bayley.

In what was, in our opinion, the best women’s ladder match yet, Bayley overcame an impressive line-up of opponents (Ember Moon, Nikki Cross, Mandy Rose, Carmella, Dana Brooke, Naomi, and Natalya) to ascend the ladder and claim the Women’s Money in the Bank briefcase.

Later in the evening, Charlotte managed to defeat Becky Lynch for the SmackDown Live Women’s Championship with a little help from Becky’s other challenger, Lacey Evans. And when Becky Lynch launched an attack on Lacey Evans to get revenge, Charlotte Flair joined in, helping Evans to clobber the former champ champ.

Ever the kind-hearted compatriot, Bayley ran down to assist Becky Lynch, chasing Lacey Evans away before laying out The Queen. Though her initial intention was clearly to defend her former fellow horsewoman, Bayley soon realized the position she had put herself in, the new SmackDown Live Women’s Champion lying “unconscious” at her feet.

Bayley appeared to weigh her options, wrestling with the choice laid in front of her, but ultimately decided to put herself above her tattered friendship with Charlotte, and cashed in her newly acquired briefcase.

To say that the crowd went wild would be an understatement. Bayley has been a fan favorite since her days in NXT and seeing her on the receiving end of not one, but two, major moments in one night was a surreal experience for many.

Bayley had been gaining momentum for months before ever stepping foot in the Money in the Bank ring, building on her already high level of credibility and veneration with the fans all the while.

And within the span of 90 minutes, Bayley competed in the best women’s ladder match to date, won the Money in the Bank briefcase, became the new SmackDown Live Women’s Champion, cut what was arguably the greatest promo of her career, and celebrated with a crowd of fans all proudly holding signs bearing her name.

It’s safe to say that Money in the Bank 2019 was the highlight of Bayley’s WWE career thus far, and cemented her place as one of the greatest women’s wrestlers of the age.


What do you think of Bayley’s triumph at Money in the Bank? Let us know on Twitter, @TheRumbleRamble.