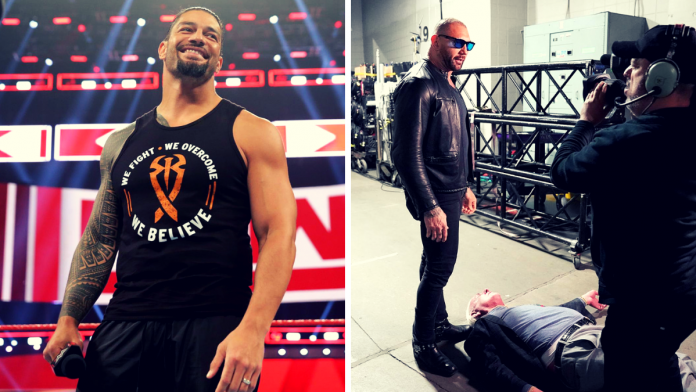 Last week on Raw, two of the most popular stars in the history of WWE found their way back to the company just in time for the buildup to the biggest event of the year, WrestleMania 35.

The returns of Dave Batista and Roman Reigns (on the same night, no less) have already given Raw some much-needed star power, which should allow WWE to heat things up even more on the Road to WrestleMania.

Last week’s episode of Raw was bookended by the return segments, which would have been exciting enough in itself but was made even better by the fact that they were complete contrasts of each other.

Reigns kicked off the show with a touching speech that updated the WWE Universe on his real-life battle with leukemia. The news itself was fantastic: Reigns’ cancer is in remission and he’s cleared to return to the ring.

After being away from the WWE Universe for about four months, but very much in their thoughts, Reigns is back and already making an impact on Raw. It’s not yet clear what Reigns will be doing at WrestleMania this year, but it seems likely that he’ll have a big role on the show once again.

This segment was bright and cheerful, with a grinning, tearful Roman Reigns reuniting with the WWE Universe and all of his WWE family backstage.

To add to the festivities, a WWE Chronicle special documenting Reigns’ journey is scheduled to air immediately following tonight’s episode of Raw.


TONIGHT: The same guy that shot Dean Ambrose’s and Paige’s WWE Chronicle has shot Roman Reigns WWE Chronicle which will be taking place tonight after Raw. We haven’t been given any preview, so expect this one to be very emotional and inspirational. pic.twitter.com/TVguaxTR1f


At the end of the show, we got to Batista’s segment. While also fantastic, it couldn’t have been more different from Reigns’ touching moment at the beginning of the show.

After being away from the company for four years, Batista made his return to WWE by attacking Ric Flair backstage while Flair was supposed to be celebrating his 70th birthday with a big party WWE had planned.

WWE went all out for the segment, bringing back legends from Flair’s past, and even planting the seeds for a Becky Lynch beatdown to close the show instead to ensure surprise.

Lynch, who is the hottest thing in the company at the moment, didn’t show up. Instead, we got possibly the only person WWE could have put in that spot that the audience wouldn’t hate simply because they weren’t Becky – Dave Batista.

The segment was shot in a unique-but-awesome way that felt more like a movie scene than WWE backstage bit. WWE did a good job of keeping the angle a secret, too, which is next to impossible in 2019.

Batista, who has been very vocal about his real-life issues with WWE in the past, went after Flair to set up an angle with Triple H for WrestleMania. Simply put, a match between the two at The Grandest Stage of Them All feels like a big deal worthy of a stage of that size.

Batista’s segment was dark and edgy; he wore black, the background was mostly grey tones, shot far away from the lights and splendor of the arena. The Animal was a long way from cheerful and smiling, and instead exuded rage and an intense loathing for everyone in WWE, particularly Triple H.

However, fans seem to be just as excited to see Batista as they were Roman Reigns, as video of the segment on YouTube has around 8 million views and has only been up about a week, making the view count an undeniably impressive number. Watch the segment below:


How do you feel about the returns of Batista and Roman Reigns to Monday Night Raw? Do these additions make you more interested in the show moving forward? Let us know on Twitter, @TheRumbleRamble.